Good-Bye to A Most Abnormal Normal Hurricane Season

Wednesday, November 30th is the last day of the 2022 Atlantic Hurricane Center, and with no areas considered to be likely to develop, it seems safe to be saying, "it's over" and do a little post-action summary.  Good-bye and good riddance.  Prior to the start of the season, predictions called for the season to be more active than normal.  In retrospect it was about 75% of normal, based on the Accumulated Cyclone Energy or ACE, a product of strength of the storms and the amount of time they existed.  The real oddity of the season was the distribution of storms.

After three weak, early-season storms, the Atlantic basin produced zero named storms between July 3 and August 31. This was the first time since 1941 that the Atlantic had no named storm activity during this period. Then, a light came on. Four hurricanes formed in September, along with three more in November. This brought seasonal activity to near-normal levels.  [Bold added - SiG] 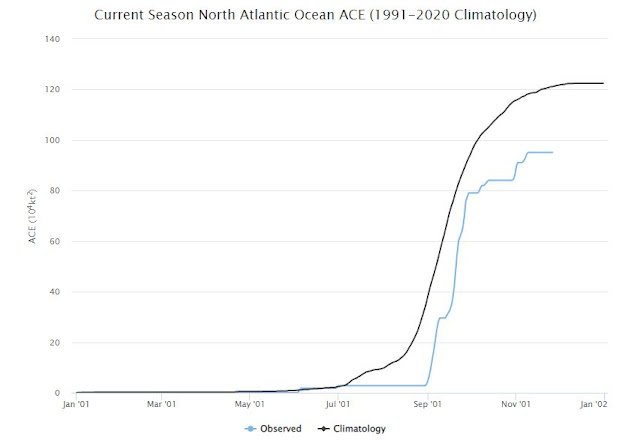 2022 ACE - Colorado State University  The black curve is the climatological normal while the light blue is this year.  This year's ACE, 95, is three-quarters of the normal value of 126.

It gets odder.  This year has been a La Nina year in the El Nino/La Nina cycles (the El Nino Southern Oscillation or ENSO) and the overall picture for a La Nina year is to be more conducive to tropical system development.  El Nino years get high level winds - wind shear - that "blows the tops off" storms that go ahead and develop in La Nina  years.  In August, the wind shear was higher than normal in the parts of the Atlantic where storms develop.  The wind shear was accompanied by drier air from the mid-latitudes, from 30 to 60 degrees north, flowing into the more southerly latitudes.

A current emphasis of the analysis of why this season was weaker than predicted is a phenomenon called "wave-breaking," which has nothing to do with ocean waves but rather low pressure waves in the air above those mid-latitudes.  Phil Klotzbach, one of the world's foremost seasonal hurricane forecasters, put it this way.

While there's evidence wave breaking was a factor in the odd season, it's apparently not the only factor.  Needless to say, the quiet August was broken soon, on September 1st by the formation of Tropical Storm Daniel.

Five additional storms followed in the next three weeks, with Hurricane Ian being the strongest of them. With maximum sustained winds of 150 mph at landfall along the southwestern coast of Florida, Ian is tied with five other hurricanes for the fifth strongest continental US hurricane landfall on record.

Another surprise came in November when the late-season Hurricane Nicole formed. It eventually made landfall along the southeast coast of Florida as a Category 1 hurricane.

We were affected by both Ian and Nicole here on the Space Coast; both were tropical storm force while affecting us.  In my book, hurricane seasons weaker than climatological are a feature, not a bug, and I'll take all I can get that way.  It is an interesting season, though, when things like this year's La Nina, which were expected to increase activity don't do that.

I've often said that hurricanes are good disasters for the lazy man, so I like them. There's no need to go get in line for plywood for your shutters, canned food or bottled water or any of that.  No need for the French Toast line we see in northern snowstorms (milk, eggs and bread).   All of it is stuff you can prepare for months or years in advance. Yeah, you have to go put up the shutters and do some stuff in advance of the storm, but you sure don't need to be in line at stores. Or in line at a FEMA tractor trailer for food and water handouts afterwards.