NASA's Perserverance Mars Rover Both Is and Isn't Where They Wanted

No, that's not from quantum superposition; Perseverance is where they intended it to land, Jezero crater on Mars; it's just that Jezero crater isn't turning out to be what it was expected to be.

The Perseverance rover landed in Mars' Jezero Crater largely because of extensive evidence that the crater once hosted a lake, meaning the presence of liquid water that might once have hosted Martian life. And the landing was a success, placing the rover at the edge of a structure that appeared to be a river delta where the nearby highlands drained into the crater.

But a summary of the first year of data from the rover, published in three different papers being released today, [November 23 - SiG] suggests that Perseverance has yet to stumble across any evidence of a watery paradise. Instead, all indications are that water exposure in the areas it explored was limited, and the waters were likely to be near freezing. While this doesn't rule out that it will find lake deposits later, the environment might not have been as welcoming for life as "a lake in a crater" might have suggested.

Like all deep space probes, Perseverance can be seen as a collection of instruments that (in this case) can be driven around the Martian landscape to take samples of the environment and measure the properties of rocks and things.  The rover has "eyes", a pair of cameras on its mast, that can create stereo images with 3D information, and offer information on what wavelengths are present in the images. It also carries instruments that can be held up to rocks to determine their content and structure; even going so far as to have remote sample-handling hardware which can perform a chemical analysis of materials taken from rocks.

Spectroscopic tools are excellent at telling us about the chemical composition of rocks, but not how the chemicals are distributed in those rocks, while there are X-ray analysis tools that offer inexact chemical information, but tell us how the chemicals it detects are located compared to the rock's visible features. Finally, the cameras on the rover's mast can help us identify how widely distributed similar-looking rocks are.

Collectively, these tools tell us that Perseverance sampled rocks from two different deposits so far. The first includes the crater floor where it landed, which is rich in iron- and magnesium-based minerals. Above that is a separate formation that appears to be volcanic rock, although we can't rule out that it was formed by rock liquified following an impact.

But the big question is whether the materials show indications that water was present. The answer there is a bit of a "yes, but..." 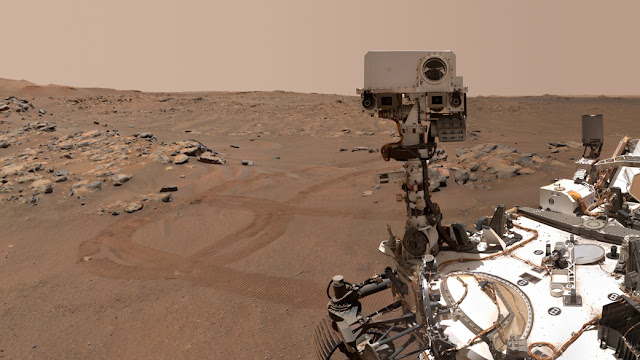 Perseverance on Mars, NASA/JPL photo.  I can almost hear the rover saying, "no, ossifer, I swear I didn't leave those donuts!"

The source article dives a bit into minerals in the olivine family, making the case that olivine minerals dissolve too easily to be a good indicator to study, and that there are no strong indications that the environment there at Jezero crater is similar to what was envisioned during mission planning.

All of this, of course, is relevant to our ability to infer things about Mars' prior habitability. But the same work also provided some more directly relevant evidence. For example, the presence of olivine also indicates that any life that was present in these deposits couldn't have been closely associated with the minerals, as the microbes would also have been unable to obtain energy from an environment that left the olivine intact.

The rover also picked up signs of organic chemicals, in the form of chemicals with one or more benzene-like rings. That description could fit some of the chemicals involved in life on Earth, but could also fit a wide variety of other materials.