SpaceX scrubbed this morning's launch of the ispace Hakuto R M1 lunar mission at 11PM last night citing (as they regularly do) the reason as, “to allow for additional pre-flight checkouts.”  About an hour ago they announced they're standing down from tomorrow morning's launch for more check out.  As you can see at the top (newest) tweet, no new launch time has been announced. 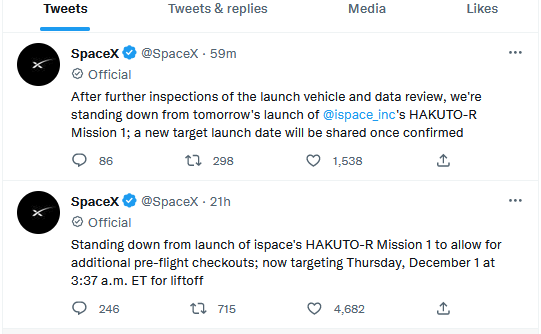 While this sort of scrub twice in two days isn't common, I vaguely recall one within the year.  They are riding quite a wave of successful launches of the Falcon 9 and considering every launch generally comes at the end of years of work at the cost of millions of dollars, I have to respect their decision to be as careful as they need to be. Caution is definitely called for.

This mission is actually carrying two payloads to the moon.  In addition to the ispace Hakuto R, NASA is sending a 6U size CubeSat to the Moon on this Falcon 9 launch as a secondary passenger.  Called the Lunar Flashlight mission, the briefcase-sized satellite is bound for a near-rectilinear halo orbit around the Moon, similar to the one the CAPSTONE mission entered earlier in November, and the one Artemis Orion is currently temporarily occupying. The purpose of this mission is to shine light into permanently dark areas near the lunar poles in search of water ice.

Rocket Lab is on the verge of carrying out their first launch from the US, from the facilities they've built at Wallops Island, Virginia. The launch is currently set for No Earlier Than December 7th, next Wednesday, although no time has been given yet.

The “Virginia Is For Launch Lovers” mission will deploy three satellites for radio frequency geospatial analytics provider HawkEye 360, with integration of those satellites to Electron taking place in the coming days at Rocket Lab’s ICF (Integration and Control Facility).  Meanwhile, NASA is continuing to make progress in certifying its Autonomous Flight Termination System (AFTS) software required for the launch. This will be the first time an AFTS will be flown from the Mid-Atlantic Regional Spaceport, representing a valuable new capability for the nation.

While “Virginia Is For Launch Lovers” will be Electron’s first launch from the U.S., Rocket Lab has already conducted 32 Electron missions from Launch Complex 1 in New Zealand, delivering 152 satellites to orbit for customers including NASA, the National Reconnaissance Office, DARPA, the U.S. Space Force and a range of commercial constellation operators. Electron is already the most frequently launched small orbital rocket globally and now with the capacity of the pads at Launch Complex 1 and 2 combined, Rocket Lab has more than 130 Electron launch opportunities every year.

The launch window is stated to run from December 7 - 20.  Those of you in the area of Wallops Island probably have a place you know of to watch launches; if not, the Rocket Lab Website lists a couple of places.   For the rest of us, it will be streamed online starting about T-40 minutes.  I usually just search for Rocket Lab at the top level on YouTube and watch there.