When SpaceX first began launching their Starlink satellites, there was talk about them causing light pollution and impacting astronomers on the ground.  SpaceX responded with a handful of modifications to the next groups to go into orbit and reduced the visual brightness of their satellites.  Visual brightness, though isn't the real problem; the problem is that satellites moving across a field of view are always going to be visible.  Amateurs and ground-based scientific observatories take long, deep exposures allowing them to see very dim objects.  Any reflection of light from a satellite will be bright enough to be visible.

Satellites interfering with astronomical observations is not a new phenomenon. “Any object in Earth orbit that reflects sun, anything with an albedo greater than zero, can possibly leave a trail in an astronomical image,” said Pat Seitzer, a professor emeritus of astronomy at the University of Michigan.

On any given night, he said, hundreds of objects might pass in view of an observatory. “We’d really like no satellites,” he said, “but that battle was lost a long time ago, beginning in 1957.”

Without spending too much time and space here, I should include a link to a description of how astronomers refer to the brightness of stars, planets and things in the night sky; it's a system called visual magnitude.  Chances are you'd expect the brightest objects to have the biggest numbers; in fact, the brighter the object the smaller the number.  The sun has a magnitude of -26.7; the full  moon is -12.6 and the brightest star in the northern sky, Sirius, is -1.4.  Every change of one magnitude up or down represents a 2.5x change in brightness.  A young person with good vision, not too old (vision gets worse with age), in a place with very dark skies can see stars down to magnitude +6, maybe +6.5.  Someone with one of the common 8" telescopes (for example - probably the most common size) can see down to 14th magnitude.  The big, ground-based observatories can see down dimmer than the 20th magnitude.  The dimmest objects, imaged by long exposures in the darkest skies can see to around magnitude 30.  At 2.5x the brightness for each step of 1.0 magnitude and compared to the 6.5 naked eye limit, that's 2.2 billion times fainter.

So while the measured data on Starlink satellites show they've dropped the peak of the distribution of brightness down to magnitude 7, that means next to zero improvement.  Mag 7 is millions of times brighter than even what the amateur down the block with an el cheapo camera can image.  They'll always be a problem to some astronomer. 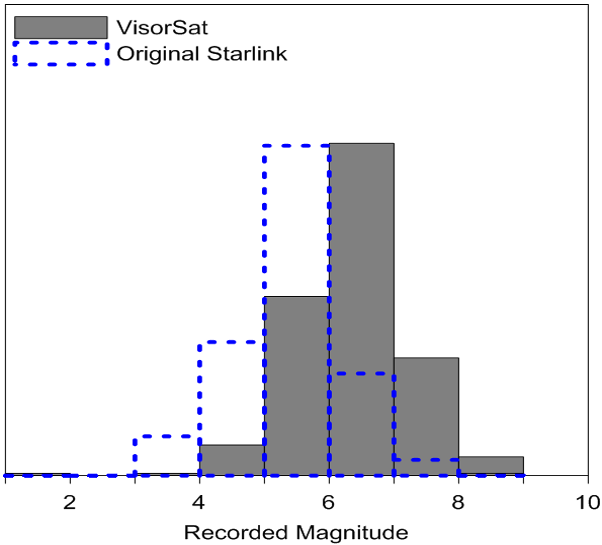 Improvement in measured brightness of the original Starlink satellites in blue outline and the first generation improvements, nicknamed VisorSat, in gray.  The shift to one magnitude dimmer is clear.  Illustration from Sky and Telescope.

All of which is to set some introduction, more accurately: reintroduction to a company and satellite we talked about before: ASTMobile and their BlueWalker 3 satellite.  SpaceX launched the BlueWalker 3 for AST in September of '22 and it has been undergoing testing.  It's now one of the 20 brightest objects in the sky.

Since BlueWalker3's launch in September, astronomers have been tracking the satellite, and their alarm was heightened following its antenna deployment last month. According to the International Astronomical Union, post-deployment measurements showed that BlueWalker 3 had an apparent visual magnitude of around 1 at its brightest, which is nearly as bright as Antares and Spica, the 15th and 16th brightest stars in the night sky.

For a few years, astronomers have been expressing concerns about megaconstellations, such as SpaceX's Starlink satellites. While these are more numerous—there are more than 3,000 Starlink satellites in orbit—they are much smaller and far less bright than the kinds of satellites AST plans to launch. Eventually, AST plans to launch a constellation of 168 large satellites to provide "substantial" global coverage, a company spokesperson said.

At magnitude 1, six full magnitudes brighter than that 7th magnitude Starlink, it's 2.5^6 or 244 times brighter than the Starlink.  But that's not the only problem and not necessarily the biggest.  BlueWalker 3 is a communications satellite aiming to connect directly to users on the ground.  That will be billions of times stronger radio signals coming down from the eventual production (which will be called BlueBird) satellites compared to the generally weak signals, near the noise floor of the universe coming out of giant receiver dishes that radio astronomers are interested in.

There are radio quiet zones in a few places around the US and ASTMobile has talked about respecting those, which they're obligated to do.  They've also said things about "actively working with industry experts on the latest innovations, including next-generation anti-reflective materials" to reduce brightness, but as discussed above, they could dim them until the satellites are invisible to the naked eye and still be far too bright for astronomical imaging. 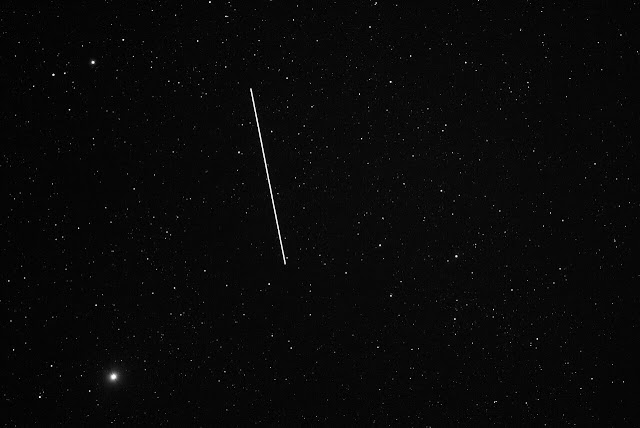