Not Sure If This Is Worth Sharing

When SpaceX last updated their launches page after the scrub of the ispace Hakuto-R mission 1 launch, they said, "A new target launch date will be shared once confirmed."  It still says that right now (2100 or 9:00 PM EST).  Twitter also hasn't posted an update.

But somehow, somebody got a launch date on SpaceflightNow's launch schedule, one of my regular "Go To" sources for this sort of information.  I discovered this accidentally, by checking to see if they had any updates.  As of a few minutes ago, they still post this: 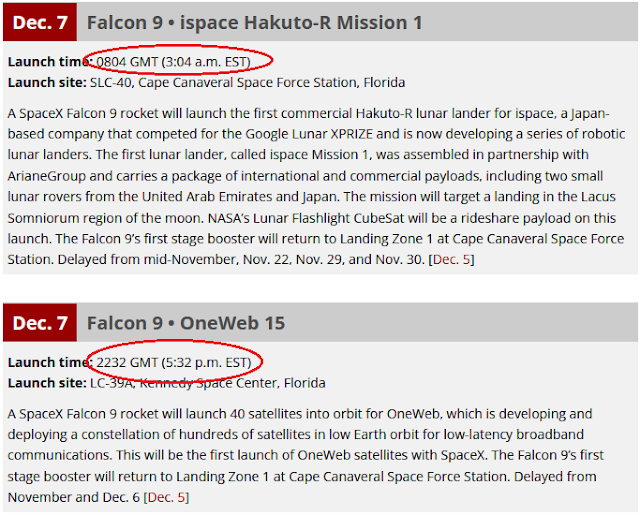 That means two launches in less than 15 hours from two pads about 3-1/2 miles apart.  From here on the east coast, that's Tuesday night / Wednesday morning - and Wednesday evening.

I'm just not completely sure if this is true and trustworthy since none of the official SpaceX channels are saying it.

I don't have any close, personal contacts working on the Cape these days, or I'd ask if those pads will need to be cleared when the other one launches.  A bigger deal for the one launching second.

Artemis/Orion fired its service module engine again today to begin its "Trans Earth Injection," taking it out of the lunar sphere of influence and starting its return on a trajectory to Earth.

The engine burn Monday lasted 3 minutes and 27 seconds, changing Orion’s velocity by about 655 mph (961 feet per second). The engine burn and the effect of lunar gravity bent the Orion spacecraft’s trajectory to send it on a course toward Earth, targeting a splashdown in the Pacific Ocean west of San Diego on Sunday, Dec. 11.

After coming out from behind the moon (from our vantage point on Earth), Orion took this picture of the crescent Earth and some epic lens flare that looks pinkish orange, embedded in a larger, more blue/purple lens flare. 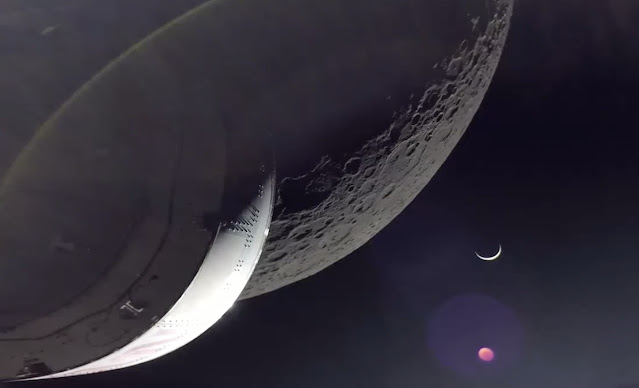