OneWeb 15 Launch - From My Yard

And now for something completely different.  I talk about launches regularly and have posted a few pictures of different launches from my yard.  SpaceX's OneWeb 15 mission was moved a day from the 12/7 launch time I posted Monday to last night, and its trajectory was just about optimum for watching and photographing from where I live, off the coast and paralleling it to the south, so I decided to try to photograph this mission from the yard.

We live slightly west of due south of the Space Center.  We're not on the beach (both of us grew up in Florida; you couldn't pay us to live on the beach), but the straight line distance from our place to the Atlantic is bit over four miles.  The equivalent distance to the launch complexes on the Cape is around 35 miles.

We moved into this area in the early days of the Space Shuttle program, and immediately became avid launch watchers.  Watching a rocket lift off from over 30 miles away means they're below our horizon and even if it was clear, flat land to the horizon we wouldn't see it until it cleared the Earth's curvature.  But it's not flat land to the horizon.  Everything around here is full of trees and houses which hide the rocket for around the first full minute.  This time of year, everything that loses leaves has lost them (we don't get beautiful falls here, but some trees lose their leaves) allowing us to see closer to the horizon.  The lower in the sky, the more likely for the view to be obscured by a tree.

Consequently, by the time we get a good look at it the first stage is around the point of maximum aerodynamic pressure (called Max Q) on it's ascent, about to go or having gone supersonic. 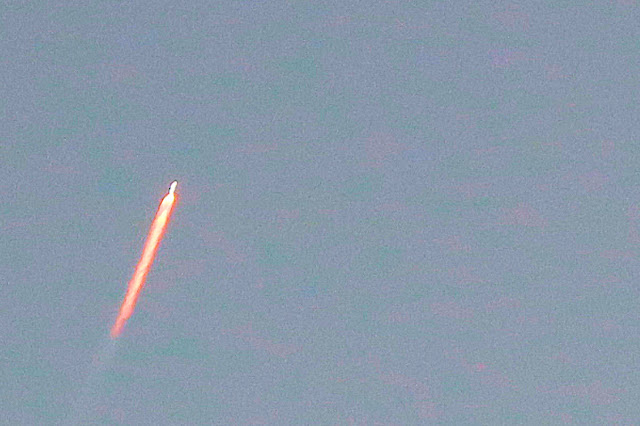 This is a several seconds after passing through Max Q and a small portion of an image magnified 2x in size.

The sky was crystal clear, while it's unseasonably warm here, it's not summertime humidity levels so it's bluer, at least when the sun is up.  With the 5:27 PM liftoff, that's almost exactly sunset on the ground, but daylight up at that altitude.  The rocket is overexposed because of that.

Several seconds later, but still short of booster engine cut off and dropping. 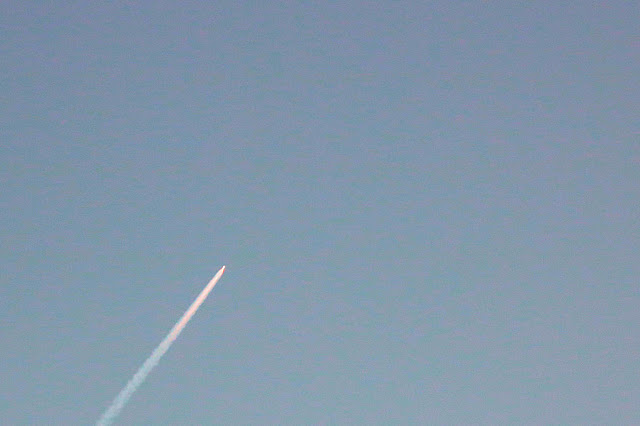 Within another few seconds BECO occurred and the first stage dropped.  At this point it engaged in a series of thruster firings to slow its southward speed and get it pointing back toward the KSC and the two landing pads SpaceX has there. 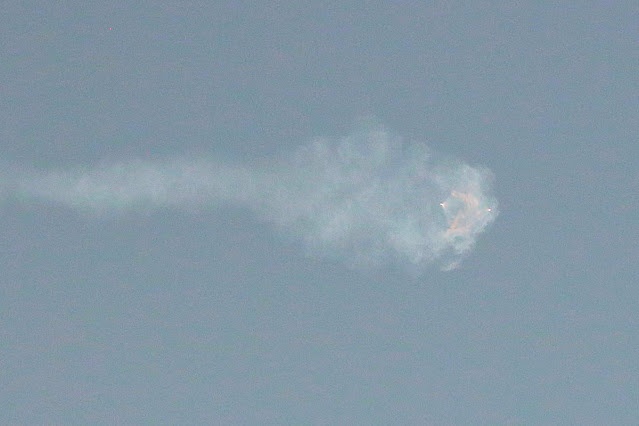 Look into the right hand edge of that cloud and you'll see an orange-tinted area.  That area has two whiter specs in it; the one on the right is the second stage headed for orbit.  The one on the left is booster, still climbing so gaining altitude while slowing down.

The two dots separated with the booster seeming to remain more stationary and the second stage still moving to the right (and up - away from the camera). 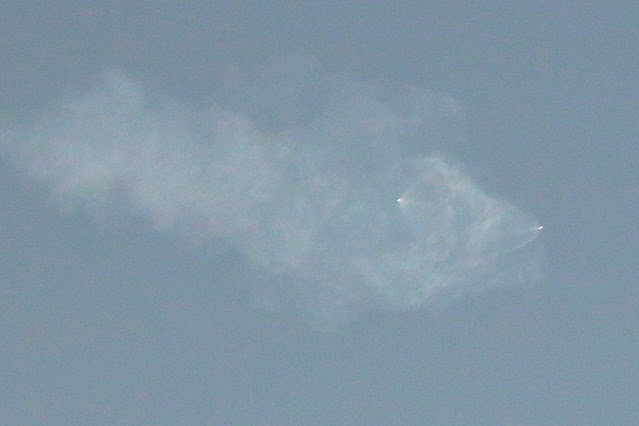 This was almost directly overhead, I'm guessing 10 degrees east of vertical, and maybe the same 10 degrees south of east.  For the next few minutes we could see the booster putting out bursts of gas from its onboard thrusters, spreading out from the booster as concentric semi-circles. Eventually, though, we knew there would be the first engine burn of the booster to wipe out much of it's speed increase in the uppermost part of its fall.  This is the one SpaceX calls the Entry burn; turning on one engine then two more and burning the three for around 20 seconds. 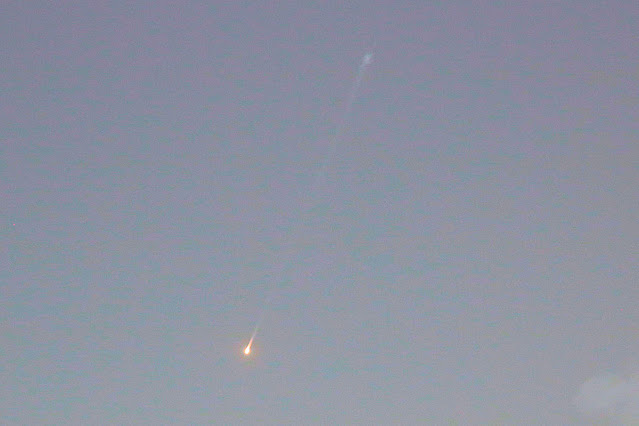 That "cloud" in the lower right corner of the frame is some of the contrail from five or six minutes earlier when the rocket went past on the way up.

The landing site for the booster is also below the horizon so we didn't try to photograph that.  I should have kept the camera up and ready, though, because we actually got a glimpse of it.  We can't recall having seen a landing burn before and my gut feel is just that the trees are probably as low on leaves as they get and we could just see through them better.  A couple of minutes later, two loud sonic booms rolled through.

This was SpaceX's 55th successful flight of the year, and the 145th successful landing (recovery) of the booster.  This is Booster 1069 (B1069) which set a record for heaviest payload to an "actual useful orbit with booster and fairing recovered for reuse" back in August. B1069 flew in October as well, a bit less than two months after the August flight, and yesterday's launch was a bit less of two months since that.  The ispace mission is still scheduled for early Sunday morning,