Turns Out It Wasn't Worth Sharing

That is, last night's post on some changes to the SpaceX launch schedule I got from Spaceflight Now wasn't worth sharing.  Both launch times they published have been proven wrong.

There is no launch date set for the ispace Hakuto-R mission.  SpaceX's Launches webpage still says when a date is confirmed they'll let us know.

There is a launch date for the One Web mission, but not the one published by Spaceflight Now:

OneWeb Launch #15 with @SpaceX is now targeted for no earlier than Thursday, 8th of December at 5:27pm ET.

We've talked about OneWeb and their problems with launching on Soyuz rockets from Roscosmos.  The Russians seized a complete payload of 34 OneWeb satellites while nullifying their contract.  With a sudden, desperate need for launch services, OneWeb hired their competitor

Falcon 9’s first OneWeb mission will launch a record 40 of the Starlink competitor’s 150-kilogram (~330 lb) satellites to low Earth orbit (LEO), where the satellites will use their own propulsion to climb to operational orbits around 1200 kilometers (~750 mi). The mission – OneWeb’s 15th launch since February 2019 – won’t be the first since Russia’s second invasion of Ukraine, a privilege that fell to the second operational launch of India’s GSLV Mk-III (LVM3) rocket.

A OneWeb executive says that SpaceX will also launch its 16th mission as early as January 2023, leaving its first-generation constellation with 540 of 648 planned satellites in orbit. OneWeb has one more 36-satellite LVM3 launch on contract, indicating that it will likely need two more Falcon 9 launches to complete its constellation. 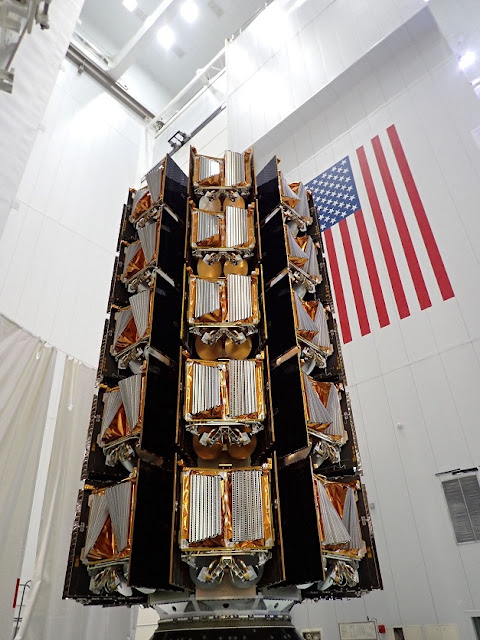 All 40 of the OneWeb satellites prepared for this coming mission, and ready to be enclosed by the payload fairing.  OneWeb Photo