Given The Apparent Success of Artemis I...

Given the apparent success of the Artemis I mission, why is it two years until Artemis II?

That's the interesting question that Eric Berger at Ars Technica took on this past Monday (the 5th).  It's a long article and in reality I could probably sum it up by being cynical and saying "it's Artemis.  It's an epic fustercluck and it has been that way since day one."  It's not that every decision was stupid.  They made sense at the time, it's just that every instance people did their best to hit a moving target that changed with no rational pattern.

"For the want of a nail the kingdom was lost."

Eric starts out this way.

[T]he reason for the long gap is a bit absurd. It all goes back to a decision made about eight years ago to plug a $100 million budget hole in the Orion program. As a result of a chain of events that followed this decision, Artemis II is unlikely to fly before 2025 because of eight relatively small flight computers.

"I hate to say that it’s Orion this time holding us up," said Mark Kirasich, who served as NASA's program manager for Orion when the decision was made, in an interview. "But I’m bringing up the rear. And it’s part of my legacy."

About eight years ago, Orion's prime contractor LockMart (Lockheed Martin) was having problems developing Orion.  It wasn't really LockMart's problem, it was that NASA had defined the requirements too differently.  At least nominally, NASA was specifying Orion and SLS rocket as part of a "Journey to Mars." The problem was that there was no clear-cut plan on how to get there and no well-defined missions for Orion to fly.  That led to an awkward decision.

One key difference is that NASA only planned to fly the original version of the SLS rocket, known as "Block 1," a single time. After this initial mission, the agency planned to upgrade the rocket's upper stage, making a version of the rocket known as "Block 1B." Because this variant was taller and more powerful than Block 1, it required significant modifications to the rocket's launch tower. NASA engineers estimated that it would take nearly three years of work after the initial SLS launch to complete and test the reconstructed tower.

The reconstructed tower?  Speaking of fusterclucks, we've talked about this one before.  The second tower is overdue (late) and over budget.  When you go down that road you come across screw-up after screw-up.  The original estimate for the second mobile launch tower was $383 million.  The current estimate is $960 million.  The job has gotten so bad that NASA has removed work from the prime contractor's (Bechtel) contract, while continuing to pay them as if they were on schedule.

Launch schedules were different then, and (of course) the delays and cost overruns for ML-2 hadn't happened yet.   So here they needed to save $100 million and it seemed like they could do it by moving this handful of avionics boxes - two dozen - from the first flight of their spacecraft to the second.  They estimated they'd need two years to re-certify the flight hardware.

By not needing to build two dozen avionics boxes for the second flight of Orion, the program closed the $100 million budget hole. And schedule-wise, they would have nearly a year to spare while work was being done on the launch tower.

But because the goals for the program were being constantly rearranged, none of this proceeded as planned.

There's much more to this story and it's not exactly a straight line.  By all means, read the whole thing.  NASA has been funding the development of Orion since 2005 and the SLS rocket since 2011. After more than a decade, they finally have taken flight together.  It's a major achievement, but projects go better, achieve better results, wasting less time and money if they have a clear objective and don't change that objective constantly. That's largely the problem with Artemis, SLS and Orion.  The projects weren't aimed at the moon or Mars; they were aimed at shoveling money into different congressional districts.  If progress happens, it's almost an accidental byproduct. 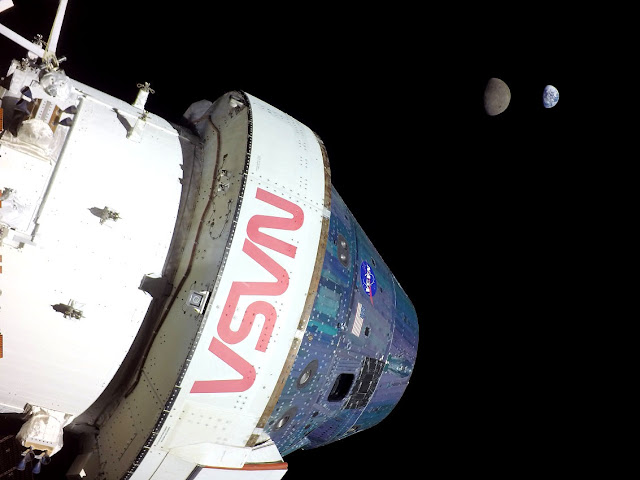 The Orion capsule captures a selfie with the moon and Earth in the early days of the mission.  NASA Photo.