In this case, “small” describes the sizes of both the stories and the rockets.

When I first mentioned the "One-Ton-Class Orbital Rocket Race" back in mid-August, it looked like the race could be over soon.  ABL Space had dates projected in September that it could fly from Kodiak Alaska and other companies appeared on the verge of flying as well, but we never saw a September launch by ABL or any other company.  By early October, it appeared that Firefly Aerospace had become the first to achieve orbit, but a few days later,

...the tracking firm Seradata said it was now classifying the mission as a "launch failure," with a provisional capability loss of 90 percent due to the likely life loss for the seven satellites aboard.

ABL is still struggling to achieve their first orbital flight, after scrubbing during all launch windows in the last couple of weeks.  In that article from Spaceflight Now, dated November 22nd, they note:

ABL conducted three countdowns during a week-long launch period at the Pacific Spaceport Complex on Kodiak Island, Alaska, to try to send aloft the company’s first RS1 rocket, an orbital-class launcher designed to haul payloads of more than one ton into low Earth orbit.

They are currently waiting for the next lineup of launch windows that will become available December 7th to try again.  Eric Berger at Ars Technica's Rocket Report adds:

A November 14 launch attempt was scrubbed about 30 minutes before liftoff due to unexpected data during propellant loading on the RS1’s first stage, later found to be caused by a leaking valve in the pressurization system. A second launch attempt on November 17 was aborted at T-minus 1.8 seconds during ignition of its nine kerosene-fueled E2 first-stage engines. Another countdown on November 21 was also aborted during the engine startup sequence.

Another launch company that I've been trying to keep up with is Relativity Space and I've covered their work toward launch before.  To briefly recap, Relativity Space might best be considered an additive manufacturing company.  Their rocket bodies, engine parts and most of the vehicle's parts (85% by mass) are 3D printed (14 second time lapse record in this video).  They recently announced that their Terran-1 first and second stages have been mounted to each other; I'd say they've been stacked, but they're not vertical, so more like lying end to end.  OK, fastened end to end. 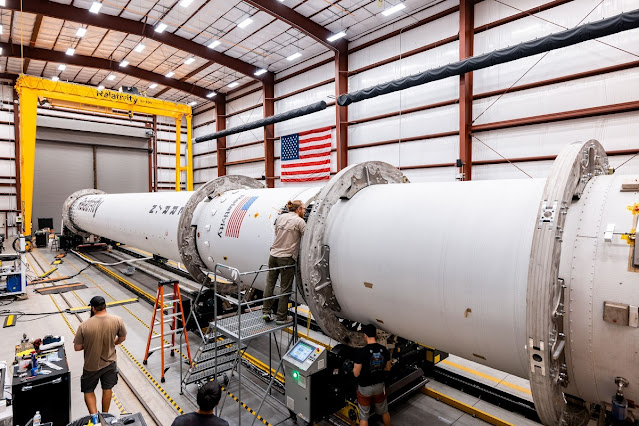 "The next time Terran 1 is out on the pad, it will be stacked and vertical. Upcoming milestones to track: rollout, static fire, and launch," the company said in its newsletter. The company also said it completed thrust vector control testing.

Considering how little is left in 2022, it seems almost certain the first launch will slip into '23, but it also seems like they might be fairly close to being ready,  Perhaps in January?

Finally, remember the TROPICS mission? As I've said almost every time I've written about it, TROPICS is the kind of name that's almost legally required to be an acronym, in this case: Time-Resolved Observations of Precipitation structure and storm Intensity with a Constellation of Smallsats (they went with TROPICS instead of TROPSSICS).  In particular, it's intended for the observation of tropical weather systems like hurricanes and tropical storms (so I hope the lame joke about the name at least makes some sense).

The last time I devoted much column space to the mission was when it kind of fell apart.  TROPICS was to have been a constellation of six radar satellites and two of the six were lost in June when Astra's rocket failed to achieve orbit and I was wondering if it was salvageable with 1/3 of the intended satellites missing.

This week, NASA announced they were moving the mission to Rocket Lab's Electron rocket.  In the initial contract bidding, Rocket Lab and SpaceX also bid on the launch and Astra won the contract, with NASA saying that Rocket Lab as significantly more expensive.  Rocket Lab will launch four CubeSats for NASA on two Electron rockets, targeted for no earlier than May 1.

And speaking of names that are almost legally required to be an acronym, NASA says the contract is awarded to Rocket Lab as part of their Venture-class Acquisition of Dedicated and Rideshare launch services contract.  They refer to this as VADR but that's begging to have the "A" in that last "and" included so that the acronym becomes VADAR.  Then they just need to come up with a fancy name that can be abbreviated as DARTH.  (Don't you correct my spelling and spoil my fun, now!)