When Artemis I lifted off on November 16th, we knew the mission was in one of the shorter, 26-28 day mission launch windows, but not exactly how long the mission would be.   As the mission has proceeded, it has become clear that the return to Earth will be December 11th, making it a 25 day long mission.

NASA's Artemis blog has been a good source of information during the mission but as usual in this business, "no news is good news" and the mission has been rather smooth.  Today's posting, for example, reports that the Orion spacecraft has fallen under the gravitational influence of the moon again.

[Let me say that I believe "lunar sphere of entry" probably is a wrong word and they meant to say something like sphere of influence, but I present it as blogged.]  Today's update is a result of what happened two days ago, on December 1st, when the Orion Service Module fired its main engine to break Orion out of its Near Retrograde Halo Orbit and begin the transition to return to Earth, and yesterday's course correction engine burn, to change the spacecraft’s velocity by about a whole 0.3 mph to ensure that the trajectory is correct.  Note that 0.3 mph is less than half a foot per second.  Compared to what?  A little later in that blog entry it says: 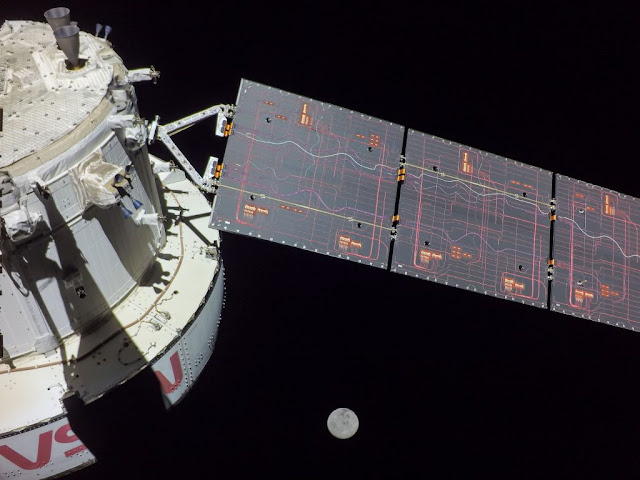 On flight day 17, December 2nd, Orion snapped this picture of the moon in the distance framed by the Orion craft and one of its solar panels.  NASA Photo.

Something that I hadn't seen elsewhere is Space.com reporting that Artemis is taking up enough time from NASA's Deep Space Network that it's affecting the James Webb Space Telescope as well as other missions.  NASA's Deep Space Network (DSN) is the small network of 14 of the largest and most capable radio telescopes on Earth.  All of their projects beyond near Earth orbit, from the Mars rovers, probes at other planets, the Webb/JWST to Voyagers 1 and 2 can need the capabilities of the DSN.

"We were told over the summer that when the Artemis space mission launched, the Deep Space Network was going to be basically fully taken by Artemis because they needed to keep track of the spaceship," Mercedes López-Morales, an astrophysicist at the Harvard Smithsonian Center for Astrophysics and the chair of the JWST Users Committee, told a meeting of the U.S. National Academies of Sciences' Board on Physics and Astronomy on Wednesday (Nov. 30).

The need for nearly constant contact with Orion has crimped the abilities of the DSN.

NASA has known Artemis would strain the Deep Space Network; the agency arranged upgrades to some antennas and added two new ones in January 2021 and March 2022 in preparation.

But communications time is still scarce. "It could be up to 80 hours — that's about three and a half days — of no contact with JWST at all," López-Morales said she was told before Artemis 1's launch.

The Webb support team uploads instructions to the telescope about once a week, so hours without the ability to communicate doesn't affect those uploads, but for astronomers to actually take advantage of the telescope, it needs to be able to beam home its data.  Since space certified memory is expensive and subject to data bits being flipped by the radiation in space, the system was designed with less storage than the scientists might like to have.  Which puts a premium on downloading the data frequently, so its computer doesn't fill up.

Artemis missions are never going to be common; every schedule I've seen is flight rates of once per year, or less; after this mission, the manned Artemis II lunar flyby isn't until 2024.  It seems like the different users are going to have to live with the interruptions.  Maybe as Artemis flights become a bit more routine than "the first one ever," the need for constant monitoring of the probe might go away.  If Artemis missions ever get to be routine.