SpaceX Does Another B7 Static Fire on Fewer Engines

Apparently after a couple of false starts yesterday that ended with no static fire, SpaceX got their stuff together today and completed another relatively long duration static fire of Booster 7.  The main difference between today and the major test they did back on November 14th is that today's test involved 11 engines instead of the 14 tested two weeks ago. 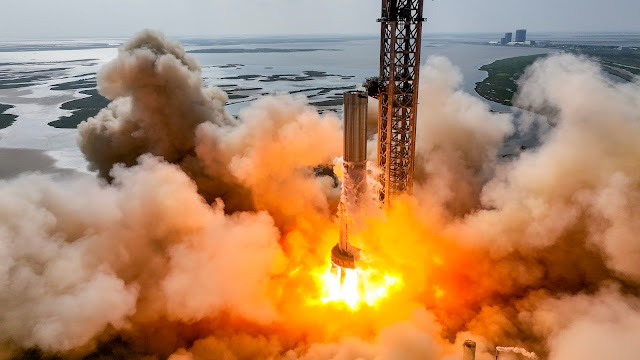 Today's test was longer than the previous test, but not dramatically longer; more like 13 or 14 seconds instead of 10 seconds.  So why the decrease in the number of engines tested?  With nothing official to go by, I can only speculate and relay other peoples' speculations.  The chat on the sides of both NASA Spaceflight and Lab Padre, was talking about SpaceX testing the ability for the self-warming and expansion of the cryogenic fuel and liquid oxygen to replace the helium they've been pumping into the the tanks.  This is an approach called autogenous pressurization.  There is also talk that to adequately test autogenous pressurization takes more like 20 seconds than today's shorter test.

They use helium because it remains a gas quite a bit cooler than the fuel and oxidizer and the helium pressure helps force the liquids into the pipes that deliver it to the "active bits" that need the liquids.  Here in technological civilization, helium isn't generally a supply issue, but on Mars it's another thing that Mars civilization 1.0 (or Moon 1.0) will need to produce - or bring along - if they ever plan to leave the planet.

While I'd seen that concept talked about before today, I assumed that the way SpaceX develops and tests their hardware meant they'd go directly to a higher number of engines.  There has been talk that the next static fire test will be all 33 engines in the Superheavy booster, but there was also talk they'd do more engines firing today, whether 22, or something else short of the full 33.  It goes without saying that they'll do whatever they think is the next most important test to do.

Meanwhile, all we can do is wait and watch.  I expect that the first launch for an orbital attempt will be in January.  The 33 engine static test and full-up Wet Dress Rehearsal could well be in December.   The more successful today's tests were, the more likely bigger tests are coming.