Back in May, as winter was closing in on the Perseverance rover and Ingenuity helicopter, there were concerns that the components on the little helicopter wouldn't survive the cold Martian winter.

The NASA engineers have had to take some fairly drastic steps to preserve Ingenuity's battery charge. For example, they have now commanded the helicopter's heaters to come on only when the battery's temperature falls to -40°, far colder than the previous point of 5° Fahrenheit. It is not known how many of the off-the-shelf components on the vehicle will fare without this additional heating during the cold Martian nights.

This week (November 22nd) we learned that the little helicopter survived the coldest part of winter unscathed, is flying again, and NASA had done a major software upgrade to improve its usefulness.  That upgrade was tested by taking the shortest test flight it had ever flown.

Ingenuity's 34th flight, which took place on Tuesday (Nov. 22), lasted only 18 seconds and saw the helicopter briefly hover after takeoff above Mars' surface before landing just 16 feet (5 meters) away from its starting point. The flight, the first since Sept. 29, was the first try-out of a new software system that was beamed to Ingenuity from Earth to improve its ability to operate in the rugged terrain that its parent Perseverance rover is currently exploring.

...The new software will use Ingenuity's downward-facing camera to detect risky objects before landing and steer Ingenuity to avoid them, allowing the chopper to use smaller airfields.

"While in flight, Ingenuity will identify the safest visible landing site," the Ingenuity team said in a statement (opens in new tab). "When preparing to land, Ingenuity will then divert over to this selected site."

It turns out the Law of Unintended Consequences works on Mars, too (as if we had any doubt).  Since the helicopter was designed to fly over flat fields, its software previously could get confused by seeing a hilly landscape underneath it. The old software would misread the elevation changes as though its own elevation was changing; assuming it was descending rather than the ground coming up at it (and vice versa).  That would lead the helicopter to "think" it was veering, which would make it actually veer while in flight in a misguided attempt to stabilize its course.  The new software will also make Ingenuity appear more confident in flight.  To whomever or whatever is watching. 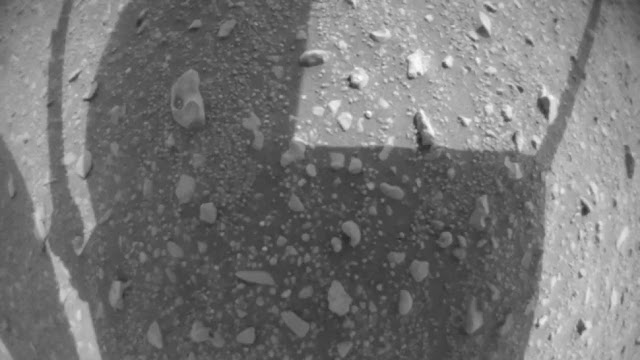