Back in March of '21, when the Ingenuity helicopter on Mars started getting talked about, it was as a minor side mission to the Perseverance rover.  I even did a piece on Ingenuity in May of 2018.  “All told, five flights are planned, with a maximum altitude in the area of five meters.  A month has been set aside for the flights, with extensive checkouts of the system between each.”

Fast forward a year and Ingenuity has blown all expectations out of the water.

The achievement of powered flight on another world is one of the great spaceflight feats of the last decade. Since its first brief hop on April 19, 2021, the Mars Ingenuity helicopter has subsequently made an additional 27 flights, traveling nearly 7 km across the surface of the red planet and scouting ahead of NASA's Perseverance rover. It has wildly exceeded the expectations and hopes of its scientists and engineers.

We might be, however, looking at sunset for the experimental helicopter.  Winter is approaching on the Red Planet, and like all vehicles reliant on solar panels, Ingenuity has had difficulty getting an adequate charge on its batteries.   A week ago, May 3rd, controllers at the JPL lost contact with the probe.  This is something mission planners consider and plan for.

They had been closely monitoring the health of their tiny spacecraft, particularly the charge state of its batteries. After losing contact, the engineers figured that the Ingenuity's field-programmable gate array—essentially, its flight computer—entered into shutdown mode due to a lack of power. In such a situation, virtually all of the helicopter's on-board electronics turned off to protect them from the cold nighttime temperatures, more than 100° Fahrenheit below freezing. This included the internal clock.

For all its flying around on Mars, Ingenuity has stayed in contact with its Perseverance mother ship, over a low power radio link.  Engineers expected that when the Sun rose and Ingenuity's batteries started to charge, it would try to communicate with the nearby rover.  The problem was that because its internal clock had reset, when Ingenuity tried to call Perseverance, the rover wouldn't be listening.  The immediate, easy answer, was to tell the rover to do nothing but sit there all day and listen for that call.

The significance of this decision is that the helicopter was initially viewed as an add-on technology demonstration. Some of the rover's leadership team did not even want the added risk of bringing Ingenuity along. The helicopter was supposed to make five experimental flights in 30 days and then be set aside. Now, the entire Mars mission was being put on hold, nearly 13 months after Ingenuity's first flight, in the hopes of saving the small vehicle.

There's a happy ending to this story:  Ingenuity did phone home the next day. The link was stable, and they were able to determine that the solar array managed to charge the little drone's batteries to 41 percent. The engineers say they hope to resume Ingenuity's flight campaign within the next several days if they can bring the helicopter's batteries to a full charge.

Still, it's still a couple of months from the deepest, darkest part of the Martian winter.  Some scary choices are being made and the little helicopter may not make it.

The NASA engineers have had to take some fairly drastic steps to preserve Ingenuity's battery charge. For example, they have now commanded the helicopter's heaters to come on only when the battery's temperature falls to -40°, far colder than the previous point of 5° Fahrenheit. It is not known how many of the off-the-shelf components on the vehicle will fare without this additional heating during the cold Martian nights. 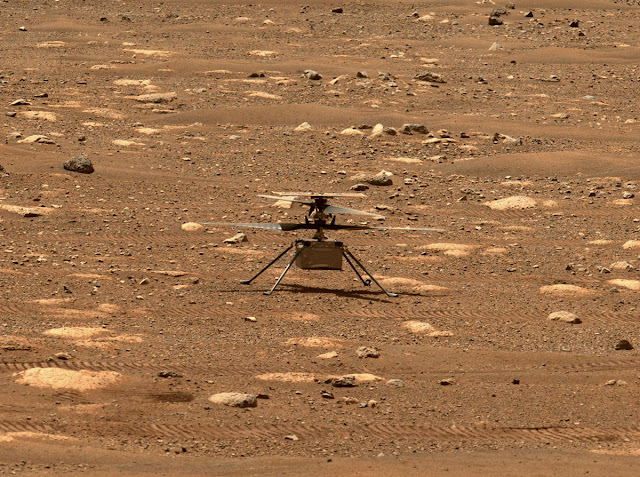 Here's where I wish I was a meme wizard and could whip out a "Brace Yourselves.  Winter Is Coming" from Game of Thrones but featuring Ingenuity.