Everyday Astronaut Gets Another Tour With Elon Musk

Last August, Tim Dodd, the Everyday Astronaut, got to take a long walk around SpaceX Boca Chica, given a tour by Elon Musk himself.   This time, Tim took a walk around Starbase with Elon Musk to talk about all the changes that have come about since last summer.  As I did last August, rather than embed it, I'm going to leave a link to it here.

While this video is nowhere near as long as the two hours and 21 minutes from last summer at just under 45 minutes, it's really rather interesting.  Tim mentions what seems to be more videos coming and I don't see any.  On the other hand, this one is two days old, so it's possible there are other videos that are in the process of being edited.

Starship is changing lots and the facilities on Starbase are changing as well.  This is pretty clear if you follow the activities there but there were many new things in the tour.

Much ground is covered.  Do they replace the grid fins with something more like aircraft control surfaces?  It's under discussion.  The boosters now have something like the chines on a boat, one on either side of the centerline, to help the control of the booster during recovery of the booster.  Do they change the original grid fin design on the Superheavy booster from four fins arranged close to a line through the booster with two on each of the opposite sides?  From two at (roughly) plus and minus 20 degrees to the mid-line of the cylinder to one on each side that's on the mid-line?  What about three grid fins on 120 degree spacing around the booster? 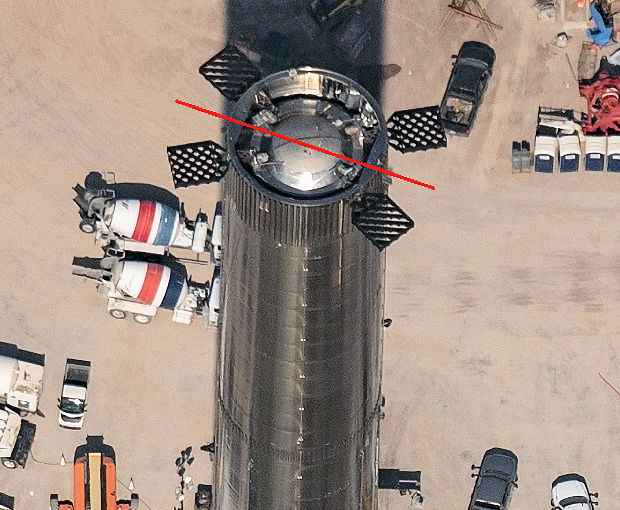 Current grid fin arrangement - two on each side equidistant from a line through the middle of the booster at about 20 degrees above and below that line.  Photo cropped from original by RGV Aerial Photography and then drawn on.

There are lots of interesting technical conversations about things on Starship, the Super Heavy booster, and "Stage Zero" - the ground-based launch infrastructure.

I'll leave you with one jaw-dropping thing Musk talked about.  Right now, the cost to deliver a useful payload to Mars is the vicinity of $1 billion per ton.  That's based on the latest rover missions, and when he says "useful payload" to Mars, he specifically excludes things like parachutes, landing stages and rockets to slow the rover down.  Musk says they are targeting dropping that cost by a factor of 10,000.  Instead of a billion dollars/ton, they're working toward $100,000/ton.  And he thinks they can make it.