Will SpaceX and Blue Origin Be Beaten to Orbit By a Startup?

As I'm sitting waiting for word that Starliner successfully docked with the ISS...

We've talked about a small startup called Relativity Space before, perhaps first back in 2019 when they secured a good chunk of funds for their development.  Relativity is dedicated to 3D printing their rocket and its engines.

Relativity may have leapfrogged past Starship and the New Glenn to become the first methane/liquid oxygen fueled rocket to get to orbit.  I stress the word may.

From this week's Rocket Report:

The California-based launch company announced this week that it has successfully completed a mission duty cycle test for its Terran 1 rocket's second stage, running the full test duration (see video from the company's test stage in Mississippi). Finishing this test means that the company believes that the upper stage, and all of its subsystems, are ready for flight. Relativity Chief Executive Tim Ellis has previously said he is highly confident that the Terran 1 rocket will make its debut launch from Florida this year.

First stage shipping soon? ... The company also announced completion of "acceptance testing" for all nine of the Aeon 1 engines that will power the first stage of the Terran 1 rocket. Then, on Thursday, Ellis subsequently shared a photo showing the first stage undergoing a test firing in Mississippi. "Data review ongoing—all clean and this baby will be shipping to our launch site at Cape Canaveral," Ellis wrote. It now seems possible that the Terran 1 will become the first rocket fueled by liquid oxygen and methane to reach orbit.

My guess is that Starship will be first; unless something goes seriously wrong, Starship seems like it could launch by the end of June or early July.  Terran 1 looks to be later in the year, although it could slip into '23.  New Glenn is officially said to launch by the end of this year.  Nobody believes that, and guesses for the first flight run from mid '23 until Q3 of  '24.

As I write, Starliner just successfully docked with the ISS.  Originally set for 7:10 ET, it was delayed until 8:28 ET, which seemed to be an ISS issue and not Starliner's. 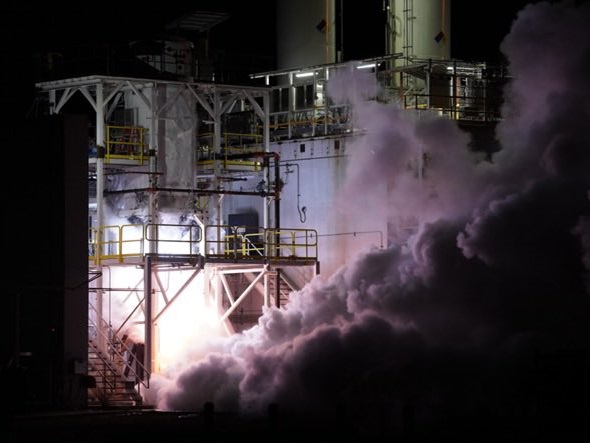