It's May Day - Also Called Victims of Communism Day

A quick check of the history of the blog shows that I've really devoted very little space to covering May 1st and the last one I can find is actually from the "Occupy Whatever" protests in 2012.  Things are different this year, since we seem to be well into an attempt at communist takeover of the country.

For all of my adult life, whenever people feel comfortable talking about such things, there's an alarming tendency for people who have grown up in the freedom and plenty of the 20th century United States to advocate communism.  If any of us would say something like, "but that never works; it has been tried over and over and it has never worked even once," that's when they give the most sorry cliche' answer in all of history and say whatever country we bring up, "just never did it right," "that's not real communism," or something just as lame.  These days, if the question comes up I say, "so what makes you think these people are the smartest and best in all of human history that can make something work that nobody else ever could?"  I've yet to get an answer to that.  They just leave.

It's hard for me to understand that argument because I grew up Miami in the '60s.  My brother (older than me) had a close friend whose family escaped Cuba just before the communists came to power and began their genocide of the Cuban people.  Since we were all within a few years of each other, I knew this friend as well.  His friend's father was an architect, so while he had to start over in Miami, he didn't have to bring lots of things with him.  As the years went by, I had several friends who were Cuban refugees and had lots of exposures to the stories of how bad it was there. Of course, the news regularly carried stories of refugees putting together anything that might float long enough to make it to the US to escape the tyranny.

For the life of me, I can't understand why the idea is attractive to anyone but psychopaths and the deliberately blind today.  In a way, it's easier to forgive the first ones, the 1917 Russians and maybe the National Socialists (Nazis); after all, they had no history to look at.  The people who let it happen didn't know that there would be nearly 50 million of their neighbors killed by the government.  But even by the '60s, when Bill Ayers, Bernadine Dorn, and the Weather Underground wanted to force communism in place here, they not only knew it would lead to millions killed, they apparently wanted to do the killing.   An FBI informant told of them openly talking about "eliminating" 25 million hard core Americans who wouldn't go along with their little utopia.  I guess the gulag's not such a bad place as long as you're the one doing the killing.

Today, with communism blamed for the death of over 100 million people, it's harder to understand how it could be so attractive.  In contrast to the guys who want to start the killings, today's useful idiots seem unaware of any history or the reality of communism - it's all magic unicorn farts and rainbows.  Famines and death camps?  Not so much.  It's as if they don't know the first things about Venezuela, Cuba, or China, and their horrific treatment of people. 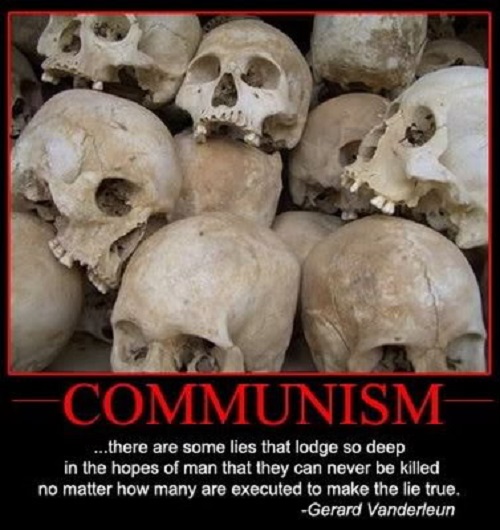 Originally lifted from The Smallest Minority, a decade ago.

There are none so blind as those who will not see.