Starliner Down, Transporter 5 Up 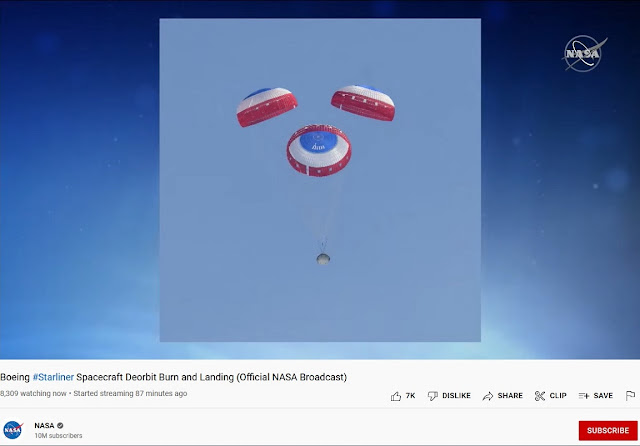 The day seemed to go smoothly; I was able to watch some of the video of the capsule leaving the ISS, and much of the recovery video.  I didn't see anything that seemed wrong, but that doesn't mean much.

Hopefully, we'll get a thorough summary within the next few weeks.

Over here at "America's Gateway to Space," it wasn't quite a routine SpaceX launch, but only because the mission wasn't a typical Starlink mission.  It was the fifth rideshare mission into Sun Synchronous orbit, Transporter 5.  The launches into that orbit tend to be ideal to watch from my location as they launch south, almost directly overhead.  Plus, the booster on these missions tends to return to the launch site and land on Cape Canaveral Space Force Station.  We've been able to see the booster's first burn, but are too far from the landing site to see the landing burn or landing.  On the other hand, we get an awesome sonic boom that shakes the entire house.

The Fun Facts are this was launch number 22 in '22, but in the 21st week of the year, not the 22nd.  It was booster B1061's eighth launch and landing (Twitter video of the landing here), the 115th recovery of a Falcon 9 booster, and the 100th flight of a Block 5 Falcon 9.  The mission carried 59 satellites into orbit, and some of them are pretty interesting.

Spaceflight’s ‘Sherpa-AC1’ won’t have significant propulsion but it will carry several hosted payloads (‘hosted’ in the sense that the payload is not a free-flying satellite of its own) after deploying from Falcon 9.

The other two or three are true orbital transfer vehicles (OTVs), meaning that they have some kind of propulsion and are designed to deploy smaller satellites in customized orbits. The ultimate goal of the many startups trying to develop high-performance OTVs is to extract the best of both worlds from large rideshare missions and small rockets, combining ultra-cheap prices and orbits that are heavily optimized for each payload. Transporter-5 may carry Exolaunch’s “Reliant” OTV (unconfirmed) but is definitively scheduled to launch with D-Orbit’s “ION SCV-006” OTV and startup Momentus Space’s first ‘Vigoride’ OTV. Vigoride carries the unique distinction of being propelled by a first-of-its-kind “microwave electrothermal thruster” that turns water into a superheated plasma propellant.

NASA has also manifested its small Terabyte InfraRed Delivery (TBIRD) technology demonstrater satellite on Transporter-5 and will attempt to prove that it’s possible to use small, high-power lasers as extremely high-bandwidth downlinks. NASA hopes the tiny satellite will be able to transmit at up to 200 gigabits per second (Gbps), allowing it to downlink terabytes of data during a single pass over an Earth-based ground station.

An experiment that caught my eye is doing something that has never been done in space before.  The satellite will only operate for one hour but companies Nanoracks and Maxar are scheduled to launch the first of multiple planned demonstrations and technology maturation missions for in-space manufacturing and construction technologies. The experiment aims to demonstrate the first structural metal cutting in space, with a technique that doesn't produce debris - what machinists often call swarf or chips.  Nobody wants to hit metal chips while going thousands of miles per hour.

Nanoracks designed a self-contained hosted payload platform to demonstrate on-orbit, debris-free, robotic metal cutting. Our partner in this demonstration, Maxar Technologies, developed a new robotic arm with a friction milling end-effector. Friction milling uses a cutting tool operating at high rotations per minute to melt the metal in such a way that a cut is made, and no debris is generated.