Now For A Break From Seriousness

Long time readers know I'm a sucker for the Marvel Cinematic Universe movies - at least since 2008 and the first Iron Man movie with Robert Downey Jr. that resulted in his owning the character.  I'm pretty sure we saw every one of those Phase 1 through Phase 3 movies.

After Avengers Endgame in 2019, I believe they started working their way into Phase 4, but I'm not at the fanboy level where I keep track of exactly what movies make up Phase 4.  Of course, the Covidiocracy hit in 2020 and impacted movies as much as anything.  The only movie they've released that I'm pretty sure marks Phase 4 is Eternals, which we saw back in October of '21.  I thought it was messy in having far too much detail in it, so much that I kept thinking "what was that all about?" or "why are they telling me this?" You got the feeling they were setting up some epic story line but it was distracting.  Plus, they worked some obvious attempts at being "edgy" into it.  For no apparent reason, one of the Eternals ends up being a gay man, and there's a fairly well-handled scene in which two of the Eternals make love.  That Just Doesn't Happen in comic book movies.

Today we went to the current big blockbuster that has been out a week, now: Dr. Strange in the Multiverse of Madness.  There might well be spoilers here, so be forewarned and see you tomorrow if you want to avoid spoilers.

To begin with, in the lead-up to this movie, there were implications that Dr. Strange's antics in last winter's Spider-Man: No Way Home, caused some sort of rip in the multiverse that led to this movie.  There was no reference to those things that I caught.  The single Marvel "event" that's closest to causing the events of this story, instead, is the world that Wanda Maximoff created in the Disney Plus TV series WandaVision.  This might be a good time to add that several months ago, our streaming service "Hulu + Live TV" added Disney + as part of the package, so we watched WandaVision among the first things we ever watched on D+.  (For the entire time we've subscribed to Hulu, they offered that price as a deal on Disney + but we never signed up.)

The idea of a Multiverse permeates two of the Marvel TV series: WandaVision and Loki.  I recall a rumor that Loki would be in this movie, but if he was, it was in some very minor, non-speaking role and I didn't notice.

The Multiverse of Madness story itself, though, is largely centered on a girl that looks to be high school age - played by a kid named Xochitl Gomez whom IMDB points out just turned 16.  Her character has the ability to somehow jump between parallel universes in the multiverse.  She doesn't know how she got the ability and doesn't really know how she does it, but Wanda Maximoff wants that power and in her alter ego of The Scarlet Witch sets out to capture that girl and take her ability.

The movie wasn't even remotely what I expected in the overview/big picture sense.  Some of what I was expecting was there, but in the fine details, not major plot elements.  It was a visual feast, as most of these movies are, with some effects that we've seen in the original Dr. Strange movie (and since then).  I was expecting a much more convoluted plot and went in thinking "prepare to be overloaded and confused" maybe to the point of needing to see it more than once.  The plot was pretty much Dr. Strange vs. The Scarlet Witch.  Rather straightforward.  We'll undoubtedly watch it again - it's worth it - but chances are high we'll wait till it's not a premium charge to watch on Disney+.

On five letter grade scale, it's a solid B.  I recommend it if you like the characters and concepts, but if that's the case you're probably going anyway.  As usual, we went to a matinee, 1PM this time, and there were on the order of 20 people in a theater that can seat 300. 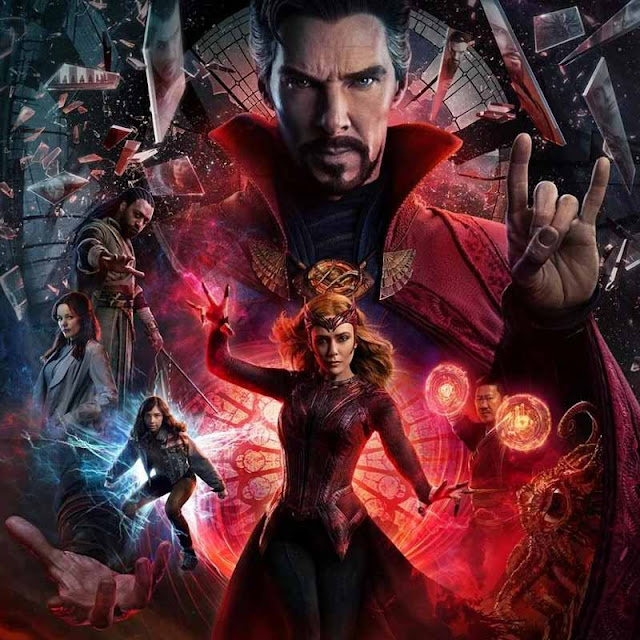