And... it's done.  By the time I was done with last week's post on the version 1 connecting rod, I had decided to do a second one, using the technique I had used on the Webster's rod.  By Monday, I had found a sacrificial piece to screw the second blank to, made the initial screw holes in that blank (to hold it down to the "fixture" and got it zeroed in the Mill's coordinate system.  That looked like this: 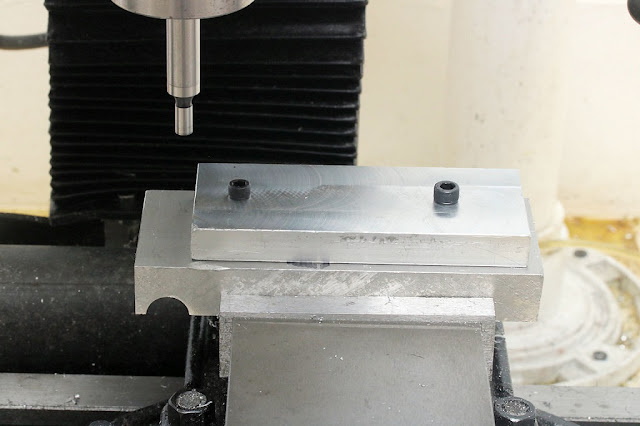 My plan was to cut a wider rough contour cut - that's the kind that just cuts the outline of the part - leaving 1/8" more metal at every point around the part instead of .025" like I did on the first version.  Then I'd cut the circular bosses and finally cut the finish contour taking away the extra 1/8" of aluminum.

The rough cut went perfectly, but when I went to cut the circular features, Mach3 wouldn't run the G-code, so I called it a day and thought I'd double check code later.  This is code I wrote (manually) so some sort of dumb mistake is almost guaranteed.  Sure enough, it turned out that I had left off a minus sign on one semicircle I was cutting.  With that fixed and running, I cut to depth around the circular features, taking away the 1/16" of depth on the rod between the circles. By Thursday, that side was done. 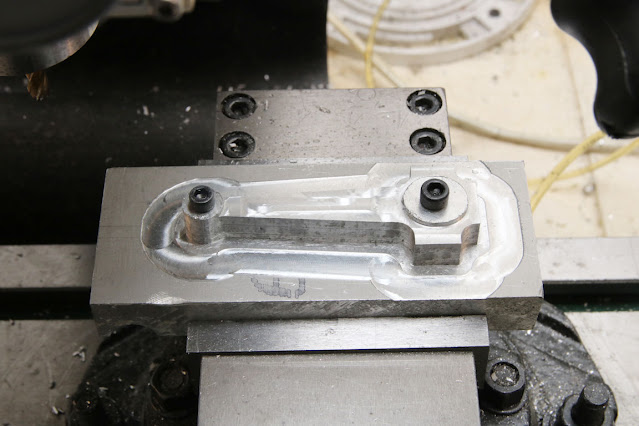 The second side took more time to fixture than to cut and was done Friday. Since it looked almost exactly like that previous picture when finished, I'll leave that picture out.

The next steps were done today.  I took the rod off that little piece of scrap, stood it on the small end, making sure the extended sides were vertical with a machinist's square.  That took several operations: I had to re-zero the part's coordinates to use the mill as a precise drill press.  For two holes, each of which gets five operations.  First, they get spotted with a center drill, then drilled through, tapped for screws, drilled halfway vertically with a bigger bit to clear that screw's threads, and finally, touched with a 1/4" end mill to make sure there's a flat spot where the screw cap sits.  After all that, it looks like this: 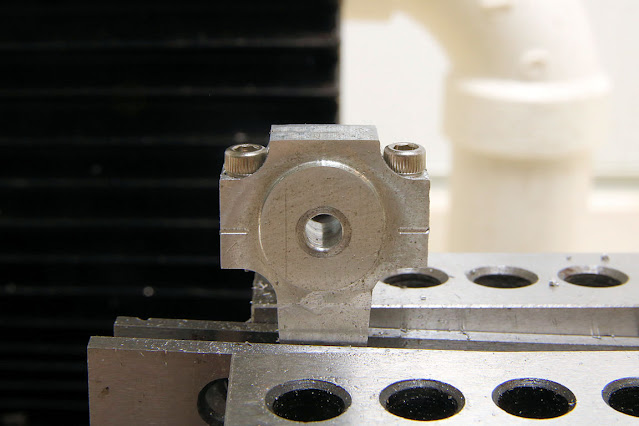 You might notice a couple of horizontal grooves on either side of the circular boss; I had the idea that I'd make scratches to lower the slitting saw blade down to and align it visually.  After I cut those grooves I decided that wasn't a good way to do it - parallax and other visual errors because the saw blade can't be right next to the engraved scratch, and set the depth of the cut by making the top of the part Z=0 and lowering the bottom of the blade to a depth I could get from the drawing.

All this to prepare for cutting the cap off.  Which has to be done before that small hole you see can be replaced with a drilled and reamed 3/8" hole for the crankshaft.  Which required yet another setup and another set of coordinates.  Now it looks like this: 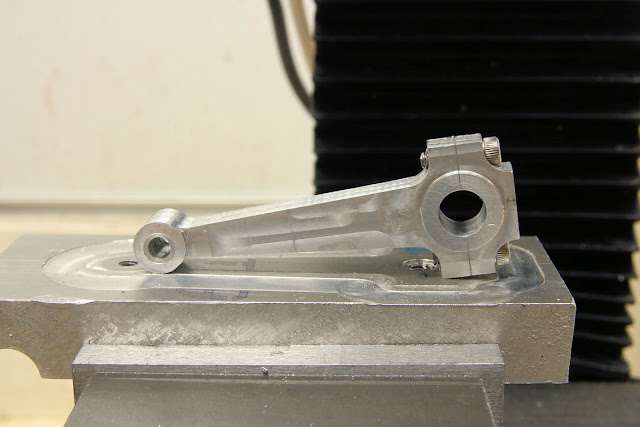 So there it is, another part to go in the "Done" box.  I see it's almost a month to the day ago that I posted about getting ready to start and how I wanted to do it.  I don't know how many parts are left to do, and I don't really want to know.  If I make one part per month I'll be working on this engine for years.  When I started the cylinder (in December!) I figured the next parts would be the matching piston because it gets sized to the cylinder, which means I need this connecting rod and the pin that holds it in the piston (called a wrist pin).  Those are lathe parts so the adventures in CNC milling are over for the moment.