About That New "Black Hole Picture"

Maybe you've heard the buzz last week about the wonderful new picture of the black hole at the center of our galaxy.  Maybe you're one of those who thinks there's no experimental confirmation of black holes or don't see how pictures could be taken of something, "so massive, not even light can escape." Or some such.  I suppose if I took the picture - no one person did - I'd be proud of it, too.  I don't see it as amazing, incredible or any of those adjectives you'll see.  But it's moderately cool.  Cool enough for a low-news-Sunday night. 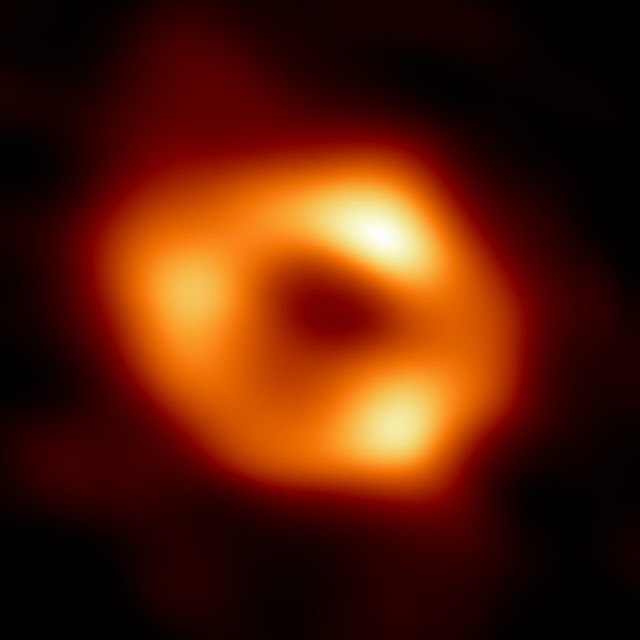 Black holes are collapsed stars which form when a star bigger than a certain size limit runs out of fuel to burn and can't generate pressure to counteract the gravitational attraction of all the matter in the star's core.  During the active phase of a stars life, the pressure of the thermonuclear explosions from Hydrogen fusing to Helium (and then heavier reactions) counteracts the force of gravity and keeps the star from collapsing into progressively higher density.  Eventually, stars run out of fuel to fuse into heavier elements and the gravity takes over, compressing the star into denser and denser versions.  Smaller stars will become a white dwarf, and if bigger, protons and electrons combine making it a neutron star (if one could get a teaspoon of neutron star material to Earth without it expanding, it would weigh about what Mt. Everest weighs).  Some large stars explode in a Supernova and some will eventually form a black hole.  Stars can collide or a more massive star can pull a less-massive star into orbit around it, and sometimes crash the smaller star into the bigger.

All of that is background, not really part of the story.  Suffice it to say that once considered a theoretical construct that had little chance of ever forming or being found, massive black holes are now thought to be present in the center of most spiral galaxies, like ours, as well as other galaxies.

So let's get back to the question, how can something that doesn't give off light be photographed?  How was that image taken?  The black hole doesn't give off light, but any material being swept up from the surrounding space and being "sucked into" the black hole can give off light - where "light" is used in the general sense of electromagnetic radiation to include infrared, far infrared and down into the radio spectrum.  The photograph is the product of what's called the Event Horizon Telescope or EHT - a worldwide network of radio telescopes that point their receiving antenna at the same object and can combine the signals from all of them precisely in phase to produce an image with the resolution of a radio telescope bigger than any of the individual antennas being used.  (The event horizon is the shape in space that's the closest to the black hole that can be observed - beyond that is where "light can't escape from.") 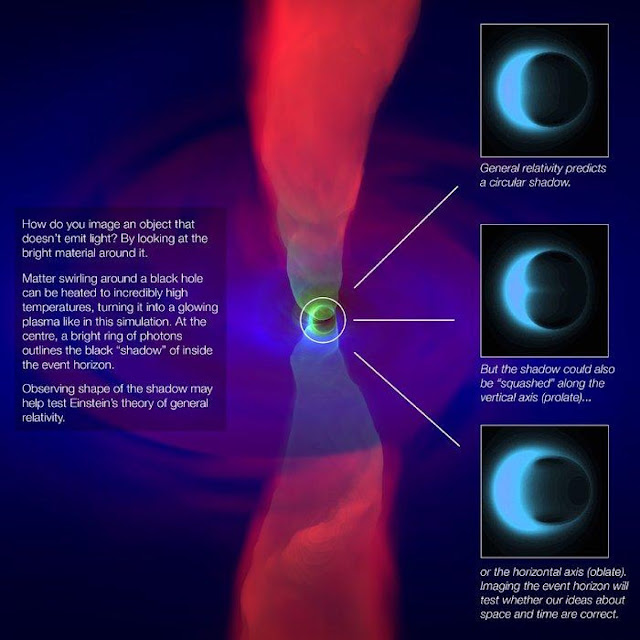 The first image ever obtained of a black hole was announced in 2019 by the EHT.  That one was of the much more massive black hole in the center of a galaxy called Messier 87 (or just M87), 55 million light years away in the direction of the constellation we call Virgo.  It turns out that although the center of our Milky Way is much closer, the black hole is rather smaller and some of the "iron laws of photographic exposures" came into play.  As as theoretical physicist Matt Strassler explained:

[T]he measurements of the Milky Way’s black hole proved somewhat more challenging, precisely because it is smaller. EHT takes about a day to gather the information needed for an image. M87’s black hole is so large that it takes days and weeks for it to change substantially—even light takes many days to cross from one side of the accretion disk to the other—so EHT’s image is like a short-exposure photo, and the image of M87 is relatively clear. But the Milky Way’s galaxy’s black hole can change on the time scale of minutes and hours, so EHT is making a long-exposure image, somewhat like taking a 1-second exposure of a tree on a windy day. Things get blurred out, and it can be difficult to determine the true shape of what was captured in the image.

To the physicists who study black holes, the picture of the glowing, lumpy-looking gas around the black hole tells stories of their formation and behavior.  The similarity to the images of M87 and the closer Centaurus A black holes shows that General Relativity provides a good explanation of the behaviors around these objects.

The heavens declare the glory of God;
the skies proclaim the work of his hands.
Day after day they pour forth speech;
night after night they reveal knowledge.
Psalm 19: 1-2, NIV