That's addressed to the story that NASA released a schedule of Artemis launches through the first half of 2023.  In reality, though, it's a schedule showing potential launch windows.  The first, unmanned Artemis mission that we've blogged about so many times could possibly launch NET (No Earlier Than) July 26, on this complicated, multicolored schedule pdf.

What's that old saying?  Don't count your chickens until they've completed their Wet Dress Rehearsal?  Not even two weeks ago, we posted that Artemis/SLS was to roll back to the pad for its WDR in late May.  That's not what you'd call a safe bet at this point.  They might, but ...

This week, NASASpaceflight.com reported that the space agency and its contractors continue to work on a number of issues encountered during the three previous attempts—particularly a leak in the purge line leading to the rocket's upper stage, known as the Interim Cryogenic Propulsion Stage. A NASA official said design modifications were likely to be needed.

Due to the ongoing nature of this work, it no longer seems likely that the large rocket will roll out of the Vehicle Assembly Building this month, which probably would push the start of the next wet dress attempt into late June at the earliest. Following a successful conclusion of this test, the rocket will still need to be rolled back to the assembly building to arm the flight termination system before it is finally wheeled back out to the launch site for a liftoff attempt.

The schedule is interesting from a different standpoint than just being a schedule.  Even the program says what I just said.  Kathryn Hambleton, a NASA spokeswoman, put it this way:

"The range of dates is not meant to convey anything about the probability of launching in 2022 or 2023.  All launch dates more than about two months out are preliminary. It is standard for the team to have a preliminary outlook several months ahead. We’ll set a more specific target after we complete wet dress rehearsal testing."

One of the interesting things about the schedule is that the mission duration isn't fixed and will vary with Earth/Moon geometry.   Depending on when the mission launches, it could last from 26 to 42 days as Orion flies into a distant retrograde orbit around the Moon.  NASA did a news release that explains these constraints in detail and said, "The resulting trajectory for a given day must ensure Orion is not in darkness for more than 90 minutes at a time so that the solar array wings can receive and convert sunlight to electricity and the spacecraft can maintain an optimal temperature range. Mission planners eliminate potential launch dates that would send Orion into extended eclipses during the flight." 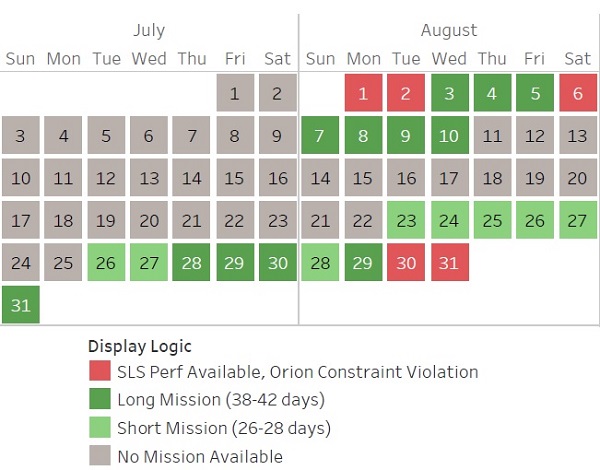 You can see that most days in July and August (combined) are gray - no mission the vehicle can complete is available on 37 days.  By contrast, the dates in red are those when the SLS could make the destinations but the Orion payload vehicle's design constraints are violated.

I'd dearly love to have some models of the trajectories and conditions I could share, but don't.

On the other hand, having the first 25 days of June not available could help soften the blow of things like the delays of rolling Artemis back out of the VAB for its WDR.

As a side note to all of this, and almost completely unrelated to it, if all goes as expected we get back to back launches Wednesday and Thursday.  Here's the surprising part: they're not both SpaceX.  Wednesday morning at 6:20AM ET, 1020 UTC, the first launch is a SpaceX Starlink mission, called 4-18.  This launch will be the fifth flight of this booster, B1052, which had its first flight as a side booster on a Falcon Heavy.   There's a report this booster will be converted back into a side booster for another FH launch potentially later in this year.  Flexibility is a good thing.

Thursday's launch is the surprise.  This will be the next attempt to launch Boeing's Starliner Orbital Test Flight 2.  More details in this piece from the start of the month.  Liftoff is scheduled for 6:54 PM, 2254 UTC.  The Atlas V with the CST-100 capsule will roll out to the pad tomorrow at 10AM, safely after the SpaceX launch.

EDIT 5/22/22 1010 AM EDT: to correct the last paragraph where I had absentmindedly referred to "Boeing's Starfire," fixed thanks to commenter Sparkee.