About Those Two First Prototype BE-4 Engines at ULA

Word has been going around that ULA has taken delivery of the first two BE-4 engines from Blue Origin.  You might have seen a picture that looked like this (maybe from a different angle).  The first time I saw something on the subject was weeks ago, around the end of March/early April; after this story.  ULA's Tory Bruno was said to be the source, but I never saw the original source so I didn't go with it. 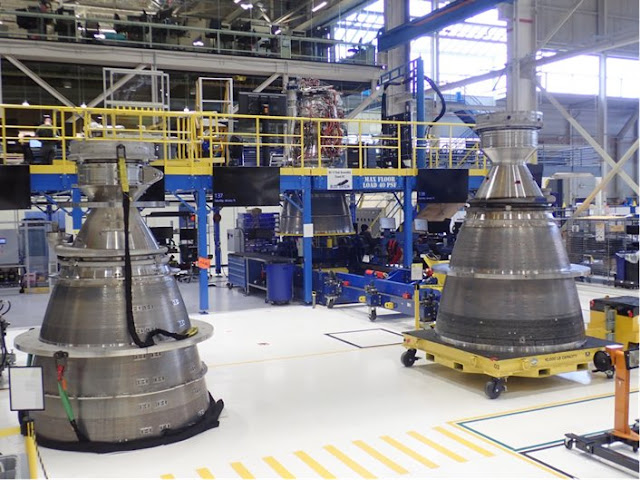 There's an obvious problem with those two engines: they're not engines.  They're the engine bell nozzles, far short of anything flyable, shipped for measurement and fit checks.  A flight ready BE-4 looks more like this.  The right half of this picture is missing in the above picture. 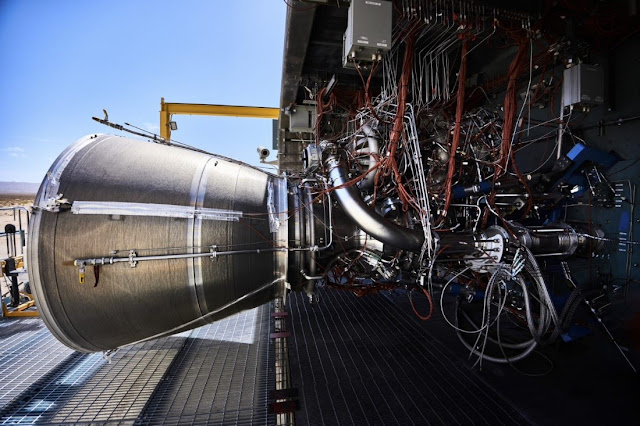 Blue Origin photo.  The first of a series of May 2nd tweets about progress with the BE-4 testing.  It's as if suddenly, out of nowhere, Blue Origin has decided to put their name out as making progress.

Teslarati SpaceX correspondent Eric Ralph points out the rather large differences between the BE-4 development and Raptor 2 development.  What they have in common is that both engines are methane/oxygen (also called methalox), are similar in size, and have similar sea level thrust numbers with BE-4 a few percent more powerful (BE-4: ~550,000 lbf, while Raptor: ~510,000 lbf).  Where they get very different is how the companies treat them.

Earlier this year, Blue Origin itself revealed that it was testing BE-4 engines "about three times a week" at its Texas facilities...Aside from being far more compact, SpaceX has also built and tested magnitude more Raptor prototypes despite starting full-scale testing a year and a half after BE-4. Compared to Blue's "three a week," SpaceX completed eight Raptor static fires in one day on May 3rd [last week], racking up almost eight minutes of burn time during the site's 14-hour test window. According to one SpaceX employee, the company delivered 24 Raptor V2 engines in a single month earlier this year. In April, CEO Elon Musk shared an image of around 18 qualified Raptor V2 engines that had already arrived at SpaceX's Starbase facilities and were waiting for a rocket to be tested on.

The phrase that comes to mind when I look at comparisons between the way SpaceX is approaching development vs. the way Blue does is the concept of being hardware rich vs. hardware poor - a concept I got from an article about Blue Origin. Hiring in John Vilja as Senior Vice President of Engines did have the effect of making them more hardware rich, but they're still light years behind SpaceX.  Development of both engines appears to have started around the same time frame, 2009-2010.  In 2014, ULA contracted with Blue to deliver the BE-4s by 2017.  While not a single BE-4 has flown, SpaceX has already flown 19 Raptors in various Starship prototype flights.

Six of those engines were recovered intact, giving SpaceX actual flight-proven engines to examine well before Raptor could be considered fully operational. SpaceX also appears to have built and tested more than 150 different Raptors since February 2019. SpaceX has also explicitly tempered design targets and maturity with near-term goals. For example, it's unlikely that current engines are easily or rapidly reusable - pursuing the optimizations needed for rapid/cheap reuse simply wouldn't make sense when Starship itself could be years from needing that capability. Blue Origin, on the other hand, says that individual BE-4 engines have completed 5000+ seconds of testing, an extremely impressive achievement but one that demonstrates a polar-opposite approach to development. Vulcan needs to work almost perfectly on its first launch. Starship does not. 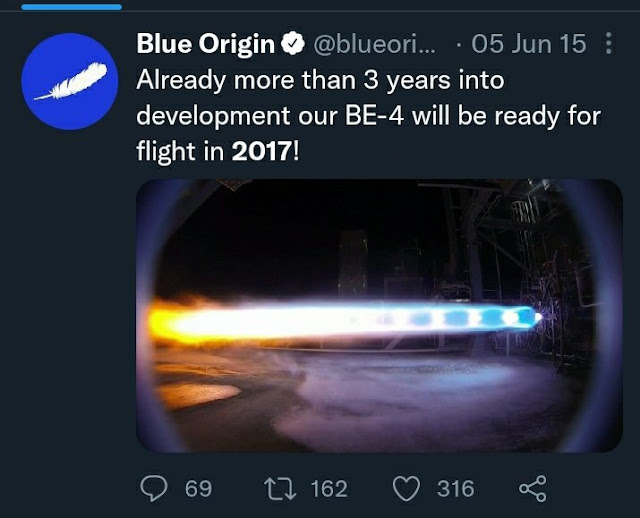 This is an actual Tweet from Blue Origin, dated 5th of June, 2015, although this copy isn't from them but from a Twitter user who saved it.  It hasn't aged well.

As I sit here trying to draw a conclusion from the roads I went down while piecing this together, I come to conclusion that it seems Blue might be on the verge of shipping the first two real, operating BE-4 engines to ULA.  Perhaps before July.