Absurd Headline of the Week

I'm so out of touch that I've never even seen anything measured in numbers of giraffes.  What does "the size of 350 giraffes" size mean?  If you had 350 giraffes milling around in a field, feeding, fighting, fleeing and doing whatever else giraffes do, 350 would only be the height of the tallest one and the width or length of 250 giraffes would depend on how close to each other they stand.  Unless you had them stand on each other's backs, which would work until the ones on the bottoms started collapsing from broken limbs. It would work better if you had them stand shoulder to shoulder, then the width of 350 giraffes would depend on how wide they are.  To use the term from electronics, is that 350 giraffes in series our parallel?

In the actual text of the article, they use a more familiar unit, saying the asteroid is "1.1 miles across."  I'm going to assume that's the long dimension and that it's probably an irregular shape.  Probably not 1.1 by 1.0 mile but 1.1 by 1.0 is still probably more likely than being 1.1 miles long and 100 feet wide.

Asteroids fly past the Earth on a regular basis, but Asteroid 7335 (1989 JA) is bigger than many of them, measuring 1.1 miles (5,900 feet) across. For comparison, it is four times larger than the Empire State Building and more than twice as large as the Burj Khalifa, located in Dubai, UAE, and the tallest building on the planet. It is also about as tall as 350 giraffes.

I hate it when magazines and other places try to be cute by using absurd units like that.  "As tall as 350 giraffes" is completely meaningless to anyone other than the person that came up with it.

The close approach of Asteroid 1989 JA was yesterday, and at its closest, it was 2-1/2 million miles from Earth, or around 10 times the distance of the moon from us.  While tracked as a "potentially hazardous" asteroid, this is the closest approach to earth calculated so far.  The calculations are through 2187, and the next closest approach to us is about 4 times the distance from Earth in May of 2114.  The "potentially hazardous" identifier is to keep an eye on it and make sure its orbit doesn't get bumped by another planet or something. 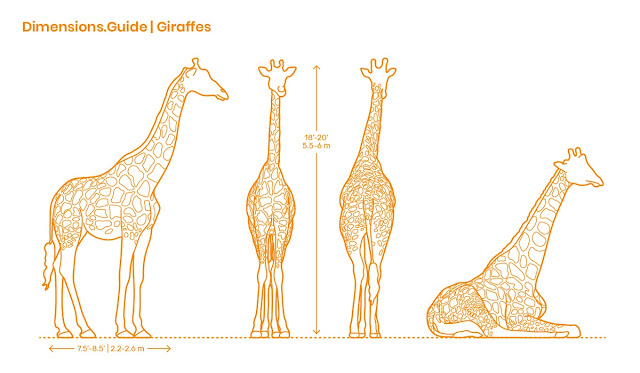 There.  Now you know a bit more about the size of a giraffe.  Not enough, but 350 giraffes makes more sense.  Image search says this was from a blog that now returns a "blog not found" message.