Just sitting down and settling in after the Starliner Orbital Flight Test 2 (OFT-2) launch, the second of this week's two, which went without a hitch on the scheduled time.  A combination of clouds with the launch trajectory heading northeast behind those clouds kept it from being visible here south of the launch site.

About a half hour after launch, the Starliner's own thrusters fired for 40 seconds to circularize its orbit, getting the perigee up to the required levels.  There are many tests going on, but the first major goal is autonomous docking with the International Space Station at 7:10 PM tomorrow evening, Eastern Time.  Starliner is scheduled to fly back to Earth next week.

As many of us have said, this seems to be to be kind of "do or die" moment for Boeing.  There's widespread chatter that if this mission doesn't go much better than December of  2019's OFT-1, they might be out of the program.  I doubt anyone thinks that every single step of every procedure needs to be 100%, but OFT-1 was so embarrassingly bad they can't get within a mile of that level of bad.  Boeing got involved in the Commercial Crew program as a $5.1 billion fixed price contract, and it has been reported that since the disastrous first test, the company has lost a half billion dollars on Starliner.  In April of '20 Boeing said it would pay to rerun OFT-1, ultimately today's OFT-2, for which it set aside $410 million.

Everyone who has cheered on the return of manned spaceflight to the USA on the SpaceX Crew Dragon might be surprised to know that some former NASA bigwigs are saying Boeing is the savior of the Commercial Crew program, and that without Boeing there would be no Crew Dragon.

"I don't think that we would be anywhere with commercial crew had it not been for Boeing coming into the fray," said Charlie Bolden, who served as NASA administrator from 2009 to 2017, during an Aviation Week webinar.  [in 2020 - SiG]  "Nobody likes SpaceX, to be quite honest, on the Hill. They were an unknown quantity. I think if Boeing had chosen to stay out of commercial crew, we probably would have never gotten funding for it."

However, Bolden said, as soon as Boeing entered the competition, congressional attitudes started to change. And he credits Boeing for taking a chance on a fixed-price contract, which was relatively new for NASA at the time. The contracting method meant that, instead of getting reimbursed for all of its expenses plus a fee, Boeing could lose money if there were technical delays or setbacks.

"Boeing was a dream," Bolden said. "I call them a champion in being willing to accept the risk for a program whose business case didn't close back then. And I'll be blunt. I don't know whether the business case closes today."

"Boeing entering the commercial crew program meant that you got a lot more support from Congress because they tend to have a very robust lobbying program," Garver said. "I was very happy when the traditional, big aerospace company Boeing bid. Because I think that was a tough call. And I think if they look back on it, they wouldn't do it again."

As for "whether the business case closes," I'd say it closes if the team doing it isn't steeped in the "old space" mindset.  The guys from the Right Stuff era weren't - there was no old space - and they changed the world.  If anyone is changing the world today, it looks far more like Starship and Super Heavy than Artemis, SLS, and, yes, Starliner. 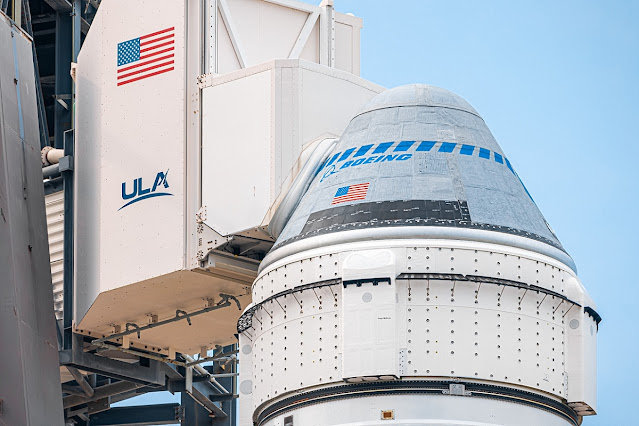 The OFT-2 Starliner after arrival at the launch complex yesterday, May 18, 2022.  Trevor Mahlmann photo.