There's honestly not much to update here, my time has been split between a big project that I have to wait on someone else to do their part before I can work on it, and the engine.  The time I've spent on that big project has been learning some new skills in the radio technician arena, and that has taken most of my weekly spare time.  I've only spent a little time on the engine, starting work on the next part which is the piston that goes on the end of the connecting rod I just finished.  The piston is a fairly simple shape - flat-topped rather than a some sort of complex curve like real, high-performance engines have.  Like the rest of the drawings I've excerpted, I've left out certain dimensions but not all. 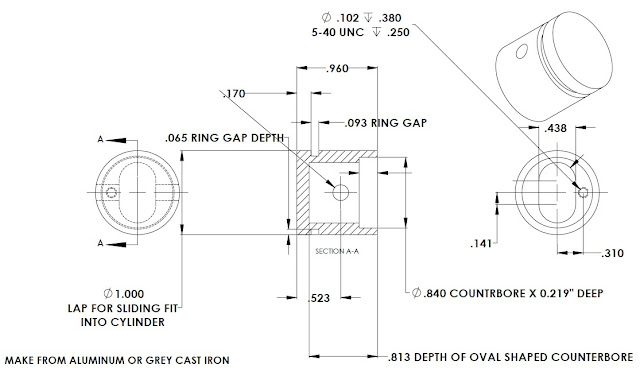 It's essentially 1.000" diameter now but needs to be sized for a sliding fit in the cylinder, which is close to .003 under (or 0.997").  I would have preferred to have started with a just slightly oversized bar, but I had some scraps of 1-1/2" bar in my stock buckets, and all I've really done is cut this down to 1.000 diameter.  No features have been machined into the 1" diameter end and the next step is to finish the piston to that "sliding fit" the print calls out. 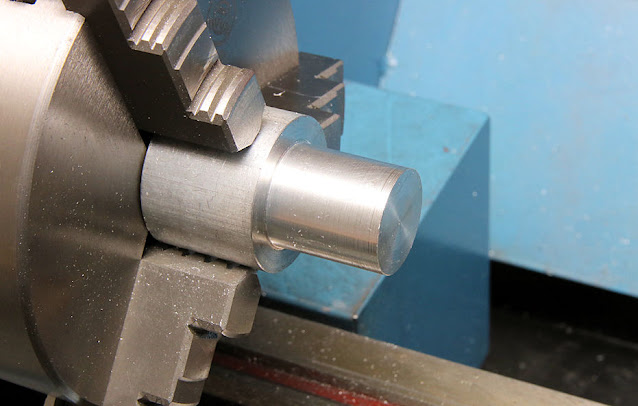 I have to say that one of the things I find hard to deal with is terms like "sliding fit."  What exactly does that mean?  I mean, a one inch diameter piston would slide in a cylinder a few thousandths of an inch bigger, but it could also "slide" in a two inch diameter cylinder - along with rattling a lot.  It would just be really tough to get any compression out of that.  I'm more comfortable with numbers and a little investigation showed that numbers have been assigned to this over the years.  There are categories of fit and online calculators that will tell you the limits given a specified size and a class of fit.  Given the descriptions of running fits for an engine, I thought the most reasonable choice was one in the middle, what's called ANSI B4.1 RC4 or RC5.  RC4 says my piston can be between 0.0008 and 0.0016 smaller than the cylinder. RC5 is looser; from 0.0016 to 0.0024 smaller.  Since the prints don't distinguish those, I'll shoot for the smaller number and if I overshoot RC4 and hit RC5, that's probably OK to live with.