Something A Bit Different

Something different from the normal run of typical space-related stories.

Next Monday, Memorial Day night through Tuesday morning, May 31, there's speculation starting among astronomers that we could be treated to a very intense meteor shower.  If you've ever stayed up late or gotten up early to watch a meteor shower, and I'm being brutally honest here, it can be a bit disappointing.  The biggest showers of the year might produce a meteor every few minutes, but that number is tremendously variable, as is the brightness of the meteors and speed at which they cross the sky.  Some of those big showers produce a few meteors in an hour, others can get up over one a minute.  The more active showers are called meteor storms and those happen rarely (although they can sometimes be predicted).  If you live in or near a city with a lot of lights on all night, you won't see them as well as you could farther away from the city in darker skies.  There are stories from before the age of streetlights where farmers thought nearby fields were on fire when it was frequent, bright, meteors.

While we can't talk about how bright they can be, some astronomers are predicting "several" meteors per second at the peak Monday night/Tuesday morning.  One source has said as many as 40 per second, which calculates out to a staggering 144,000 per hour, if (BIG IF) the rate were to hold steady.

One of the lesser known meteor showers (lesser known because it's not typically impressive) is called the Tau Herculids.  All meteor showers are named after the area of the sky they seem to be radiating from, but those tend to be constellations.  For example, the Geminids from the constellation Gemini, or the Leonids from Leo.  The Tau Herculids appear to radiate from near a specific star in the constellation Hercules, designated by the Greek letter Tau.  Except that they don't.  That radiant was calculated when the comet was first discovered 90 years ago, and the comet has had its orbit changed by interaction with Jupiter over the years.  It actually radiates from near the star Arcturus, which is convenient because it's one of the brightest summer stars that's easiest to find and identify.

Meteor showers occur when the Earth goes through the path of a comet and the meteors we see are dust and debris that the comet sheds.  (There are also showers that have been tracked to an asteroid crossing our path.)  Going over to the EarthSky article (link in the previous paragraph):

Its parent comet is 73P/Schwassmann-Wachmann 3, aka SW3. Astronomers found this comet in 1930. It orbits the sun every 5.4 years. And the comet will be in our evening sky again, in July and August 2022. It’s not an intrinsically bright comet. But it’s an exceptionally interesting comet. In 1995, astronomers watched as this comet began to fracture and litter its orbit with an increasing amount of debris.

That’s why, by some recent calculations, the May 2022 Tau Herculid meteor shower – spawned by SW3 – might be an intense display. Bill Cooke, who leads NASA’s Meteoroid Environment Office, said:

This is going to be an all or nothing event. If the debris from SW3 was traveling more than 220 miles per hour (354 kph) when it separated from the comet, we might see a nice meteor shower. If the debris had slower ejection speeds, then nothing will make it to Earth and there will be no meteors from this comet.

And that last paragraph is the "gotcha."  We might get a wonderful, truly once in several lifetimes show and we might get nothing.  Or anywhere in between.

Because the orbit of the comet is precisely known, the timing of when Earth's orbit crosses the comet's dusty trail can be calculated.  Three teams have all calculated times for this event and they're all within a 22 minute window.  They're almost ideal for the continental US. 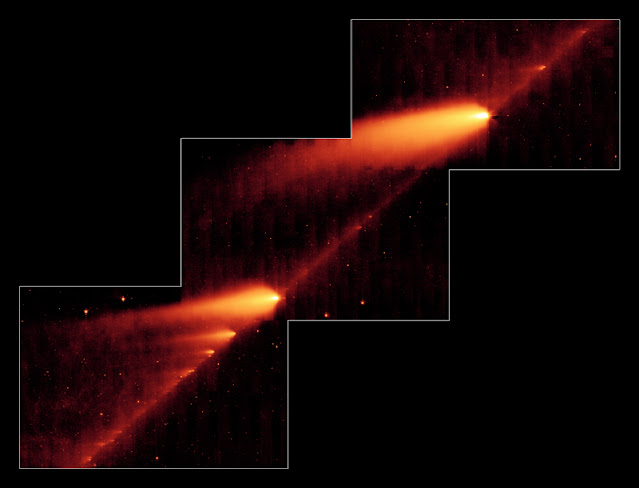 An infrared image of the comet 73P/SW3 in 2006, skimming along a trail of debris left during its multiple trips around the sun. The flame-like objects are the icy comet fragments and their tails. The dusty comet trail is the line bridging the fragments.

I think even if I was still working, I'd sit in the backyard from about 12:45 to 1:30 AM next Tuesday morning.  It would be better to get away from city lights.  Arcturus will be very high in the sky (here), almost overhead, but a rough estimate says to look about 45 degrees away from the star, toward the west.  I'm going to assume that if you've read this far, you can probably find Arcturus (find the big dipper and follow the arc of the handle until the first bright star you find - that's it).  This link may be helpful, or this one.  Another summary of this story is in this video, set to start just before he gets onto this subject.