One Down, One to Go

Got up early for this morning's Starlink mission and found that the launch time had been changed, from 6:20 to 6:59.   That's about a half hour after sunrise.  I didn't learn until later in the day that the change was about two hours before the launch time.  Photographer Trevor Mahlmann Tweeted "With just two hours notice of a new launch T-0, captured @SpaceX’s Falcon 9 transiting the Sun this morning in Florida."  Mahlmann's work appears regularly on Ars Technica. 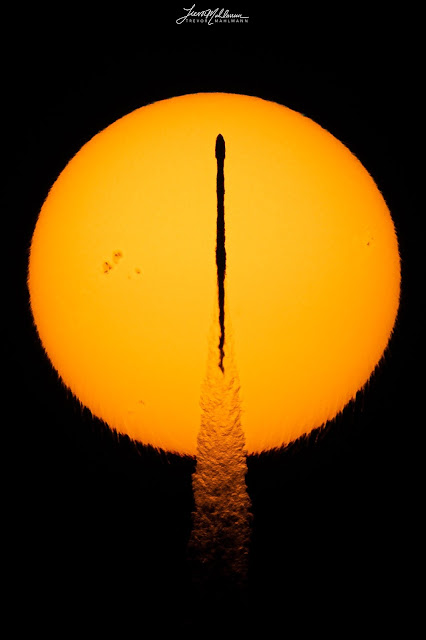 Notice the sunspot groups on either side of the rocket?  Look around, there's a sunspot group near the right limb and the larger couple of groups left of the booster.  Those are moving left to right so the group on the left will be facing Earth in a couple of days, centered on the disk.

Booster B1052 successfully landed on A Shortfall Of Gravitas offshore of the South Carolina/North Carolina state line.

Eric Ralph at Teslarati points out that this the 28th launch since November 11, 2021, which is 27 weeks - one week over halfway to the goal of one launch/week for 52 weeks.  The company certainly seems to be able to support the operational goal of 52 launches in calendar year 2022.

Later in the morning, Starliner successfully rolled out to the launch pad atop its Atlas V booster, for tomorrow evening's test flight to the Space Station.