Boeing's Starliner Orbital Test Flight (OFT-2) continues to proceed in a relatively acceptable manner.  That is, it's far from 100% flawless, but it's clear they've come a long way.  I watched some of the video coverage today surrounding the closing of the intravehicular activity (IVA) hatch on the capsule in preparation for undocking from the ISS tomorrow and there seemed to be unexpected issues that had to be worked through.  The schedule calls for the reentry to occur fairly quickly after leaving the ISS, with touchdown at the White Sands Missile Range in New Mexico at 6:49 p.m. ET.  Coverage of undocking and landing will start at 2:00 p.m. ET on NASA TV and at NASA.gov/live.

There have been reports of problems throughout the mission but apparently with enough margin in some cases (thruster issues early in the mission) or that could be overcome with enough persistence and (probably) expert assistance.  Nothing that's a showstopper.  I don't know enough to give them a letter grade, but I suspect they will pass.  They may have a list of things that need to be addressed before NASA will grant them approval to do a crewed flight, but the mission has been far better than the 2019 fustercluck.  I'm just guessing but I bet they get a grade that's not failing but not ready to join the real work quite yet.

Today, Teslarati reports that on May 23, a website named Space Explored published a report citing sources at both SpaceX and NASA alleging that the SpaceX Crew Dragon spacecraft experienced major issues during Axiom-1, the company’s first all-private astronaut launch to the International Space Station (ISS).  The report alleged that the Crew Dragon leaked hypergolic propellants during its 17 day flight which caused excessive wear (damage) to the heat shield which caused “dangerously excessive wear upon reentry.”  The website says they reached out to both NASA and SpaceX for answers but didn't receive a reply in a time they thought reasonable, so they published.  The space agency then did answer, which Space Explored had the honesty to print.

The data associated with Dragon’s recent crew reentries was normal – the system performed as designed without dispute. There has not been a hypergol leak during the return of a crewed Dragon mission nor any contamination with the heat shield causing excessive wear. SpaceX and NASA perform a full engineering review of the heat shield’s thermal protection system following each return, including prior to the launch of the Crew-4 mission currently at the International Space Station. The heat shield composite structure (structure below the tile) was re-flown per normal planning and refurbishment processes. The thermal protection system on the primary heat shield for Crew-4 was new, as it has been for all human spaceflight missions. SpaceX has only demonstrated reuse of selected PICA (Phenolic-Impregnated Carbon Ablator) tiles, which is a lightweight material designed to withstand high temperatures, as part of the heat shield on cargo flights.

NASA and SpaceX are currently in the process of determining hardware allocation for the agency’s upcoming SpaceX Crew-5 mission, including the Dragon heat shield. SpaceX has a rigorous testing process to put every component and system through its paces to ensure safety and reliability. In early May, a new heat shield composite structure intended for flight on Crew-5 did not pass an acceptance test. The test did its job and found a manufacturing defect. NASA and SpaceX will use another heat shield for the flight that will undergo the same rigorous testing prior to flight.

Crew safety remains the top priority for both NASA and SpaceX and we continue to target September 2022 for launch of Crew-5.

I suppose the puzzle here is why NASA and/or SpaceX took a while to respond but there could be any number of innocent reasons here: perhaps the person who could answer it most directly wasn't in the office, or the people at the two organizations who speak to each other regularly were out, or even something as simple as they played phone tag and never talked with each other.

On the other hand, and I didn't recall hearing this, Eric Ralph at Teslarati points out that there was a Crew Dragon mission that really had excessive heat shield wear, the Demo-2 mission back in 2020.  Given that,

"... it’s almost impossible to imagine that NASA and SpaceX would have proceeded with Crew-4’s launch two days after Axiom-1’s recovery without confidently verifying that heat shield erosion was within normal bounds. SpaceX’s upgraded Phenolic-Impregnated Carbon Ablator (PICA-X) Dragon heat shield tiles are reportedly designed to erode [PDF] less than a centimeter of their circa-2017 ~7.5 cm (3 in) thickness after each reentry. Musk has gone even further, stating in 2012 that “[PICA-X] can potentially be used hundreds of times for Earth orbit re-entry with only minor degradation each time.” If true, it would be extremely difficult for even a brisk post-flight inspection of Axiom-1’s Dragon capsule to miss what Space Explored described as “dangerously excessive wear.”

All told, it's tough to reconcile the initial reports that Space Explored went with, supposedly coming from "sources at NASA and SpaceX."  Are these sources who aren't really involved in the program and they reported on some rumor they heard and misunderstood?  Or is that whole line about inside sources a lie and it was a rumor that Space Explored got from somewhere else? 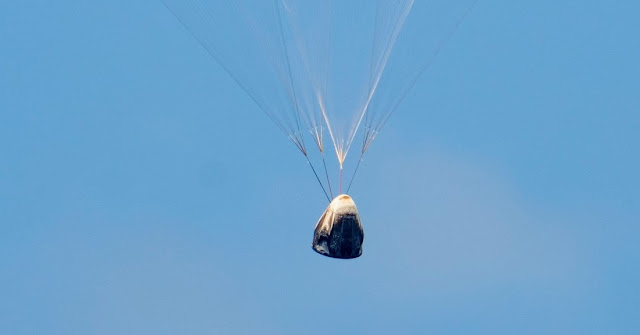