Insiders close to the development of the Blue Origin BE-4 engine are saying that the first two space qualified BE-4 engines are on schedule for delivery before the end of the year, according to an article today on Ars Technica.  The article isn't a press release or some other formal announcement from BO, it's an investigation of why the engines are at least four years late in delivery.

The company aspires to deliver these two flight engines to United Launch Alliance before the end of this year, although that increasingly appears to be a "stretch" goal. Delivery may slip into early 2022. And in order to make this deadline, Blue Origin plans to take the somewhat risky step of shipping the engines to its customer before completing full qualification testing.

ULA took the risky step of contracting Blue Origin to develop the new engines for their new Vulcan rocket back in 2014.  ULA is an old-space company and they were betting on a new company with very little to show for itself, but promising to deliver an engine comparable in performance to the Space Shuttle Main Engines at a lower cost and deliver them by 2017.  There's much interest in why the program has been delayed so much, but Blue Origin has been silent.  The interest is not just the space program watchers, and not just ULA (we would assume they get regular updates from BO), but also includes the DOD.  ULA is a main supplier of launch services for DOD payloads and it's in their interest, too.

Despite this widespread interest, however, Blue Origin has said almost nothing publicly about the engine development. Therefore, this story attempts to provide some context for why the BE-4 engines are late. It is based on anonymous sources at the company's headquarters as well as industry officials, some of whom would likely be fired if they were named.

According to his sources, the first two engines (1 and 2) are not assembled but most of their components are built.  BO is embarking on an aggressive and risky approach to completing the certification of the engines.  They've never tested an engine identical to the first two they'll deliver, but they say they have tested an engine close to the configuration of the flight engines, and it has performed well during hot firings that approximate the duty cycle of a Vulcan first stage launch.  I've italicized the words with highest pucker factor in my reading.

They intend to test two more of these close engines this fall at their facility near Van Horn, Texas and then it gets more dicey.

After these tests, a fully assembled flight engine no. 1 will be shipped to Texas to undergo a fairly brief round of tests, known as acceptance testing. If this engine passes, as expected, it will be shipped to ULA. Then a virtually identical BE-4 engine will be sent from Kent [Washington] to Texas. This "qual" engine will undergo a much more rigorous series of tests, known as qualification testing. The idea is to push the engine through its paces to find any flaws. Then a similar process will follow with flight engine no. 2, followed by a second "qual" engine.

There's a risk that engine no. 1 or 2 will be installed and undergoing checkouts by ULA, the qual engines will fail some tests, starting design fixes and ULA will have to remove the engines for modification or replacement.  Any testing they have done will have to be repeated as well. 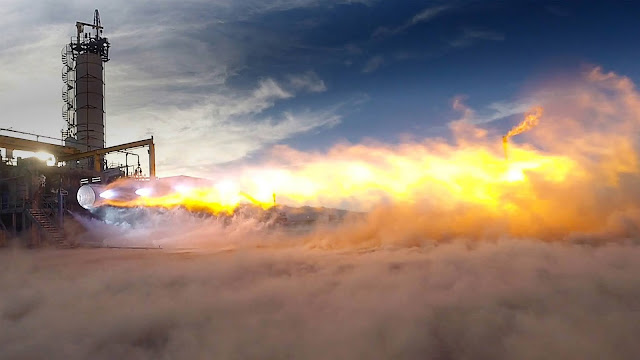 BE-4 test fire on the stand in Texas.  Blue Origin photo.

Why are the engines late, anyway?  The summary I get out of it is one word: mismanagement.  Aside from the distracted leadership of Jeff Bezos, a consistently reported persistent problem is that the BE-4 engine testing and development program has been relatively "hardware poor" in recent years.  The way I read that, it means if some component wasn't working properly, or just suspected of that, there was no way to swap it out and try another.  Granted that having plenty of hardware is expensive, but saving money that way can be "penny wise but pound foolish" and more expensive.

It apparently wasn't always that way.  Back in '17, when the engines were supposed to be delivered, they claimed to be "hardware rich."  Being hardware poor seems to be a result of when Bezos hired Bob Smith formerly of Honeywell to run Blue Origin.  According to the sources, Smith focused more on reorganization of Blue Origin's leadership rather than hardware development. Other programs were prioritized, too, so the BE-4 team didn't get all the resources and freedom it needed to proceed at full speed.  (Everyone who has worked for a big company and been re-organized dozens of times is now identifying.)

It's not all grim.  About two years ago, BO hired an experienced propulsion engineer, John Vilja as Senior Vice President of Engines.  Over the last 12 to 18 months he has instituted a lot of changes, not the least of which was creating a more hardware rich environment.

Blue Origin spent much of 2019 redesigning turbomachinery within the BE-4 engine and then testing those fixes late that year and into 2020. This issue now appears to be largely behind the company. COVID-19 also impacted development and testing, with engineers largely working remotely in 2020. That made it more difficult to be hands-on with the engines alongside the technicians in the factory.

Blue Origin has also had to deal with stringent requirements from United Launch Alliance for aspects such as combustion instability. This potential problem has plagued US rocket engines since the massive F1 engine built for the Saturn V rocket in the 1960s. Combustion instability involves rapid, unexpected pressure changes inside the thrust chamber during ignition of fuel and oxidizer. If this instability propagates, it can destroy an engine.

The challenge for Blue Origin is that in working for ULA, it is essentially dealing with the US military, which has exacting standards for the performance of rocket engines launching its most valuable payloads. And since the BE-4 will be called upon to launch high value satellites for the Department of Defense nearly from the beginning, it must meet those standards up front rather than after a number of test flights. The paperwork and testing required for such certification is lengthy.

For obvious reasons, we don't know that BO is going to deliver these engines, pass qual. test or any other goals talked about here, but I think one of the reasons so many are skeptical of BO is because they're not transparent about what has been going on.  Everyone who follows the space programs knows that engine development is high risk, difficult stuff.  We expect setbacks and problems.  We understand that some development programs are harder than others.  Being as opaque as BO just invites more doubt.  I'm just surprised there haven't been more comic memes about BO besides this one.