Just last Thursday, some of us were speculating that since we haven't heard anything out of Blue Origin in quite a while, something must be going wrong in the development of the BE-4 engine and New Glenn booster.

Today, Ars Technica relays the news that ULA CEO Tory Bruno confirmed that, in a way, by announcing Blue Origin had fixed their issues.


United Launch Alliance Chief Executive Tory Bruno said Friday that the problem was "sorted out," and that the full-scale, flight-configured BE-4 engine is now accumulating a lot of time on the test stand. Bruno made his comments about one hour into The Space Show with David Livingston.

Bruno's company, ULA, is buying the BE-4 engine to provide thrust for the first stage of its upcoming Vulcan-Centaur rocket. This booster may make its debut next year, although ULA is still awaiting delivery of BE-4s for the first flight. Two of these large engines—each providing about 25-percent more thrust than the RS-25s used on the Space Shuttle—will power each Vulcan rocket.

Blue Origin has been hotfire-testing the BE-4 engine for about three years, but there have been rumors of development challenges. Bruno himself confirmed during an interview two months ago that the turbopumps, which feed propellant at high pressure into the BE-4 combustion chamber, still required some troubleshooting. "It isn’t easy, but we know we can do it," he told the Denver Business Journal in August.

Blue Origin has been working on developing the BE-4 for the better part of the past decade. The BE-4 is a staged-combustion design running on methane and liquid oxygen. The engine will power ULA's Vulcan-Centaur as well as BO's New Glenn rocket, which Ars reports is unlikely to fly before at least 2022.  It may seem odd for competing rockets to use the same engine, but as Bruno has explained, it was less expensive for ULA to procure its main engines from Blue Origin than Aerojet Rocketdyne. 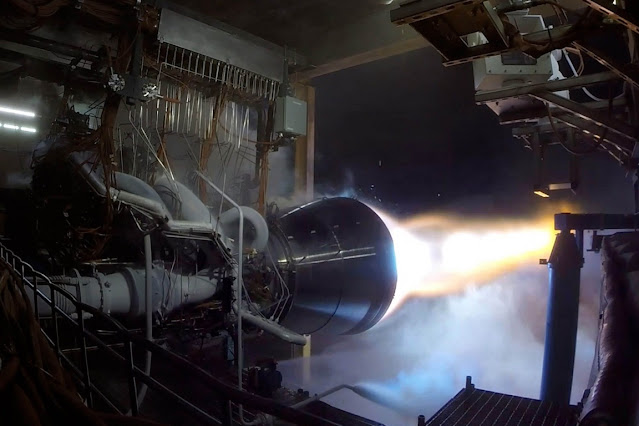 It has been said that the launch business may not exactly be "winner take all," but it certainly seems to be "winner take most." Let's assume for a minute that the SpaceX Starship meets its design goals and reaches orbit in 2021. They might not take every bit of business from the New Glenn, but it sure seems like they'll take most of it.  The New Glenn goes up against a launch vehicle that's bigger, and carries more payload to any orbit at a lower price?  Where exactly does that say "Winner" for New Glenn?
That aspect aside, I thought I'd post this story in light of the discussion about this in the comments last Thursday and Friday.