Blue Origin has been working toward this mission for some time, and today successfully completed the 13th suborbital flight of one of their New Shepard rockets in West Texas.


The complete mission video is 52 minutes; this video should be starting with about 60 seconds left in the countdown.

The story is carried by Teslarati, the “unofficial but affiliated” SpaceX site I follow, and they naturally compare the New Shepard to the Falcon 9, but we'll let Blue Origin take their bows first by quoting their statement on YouTube.


Blue Origin successfully completed the 13th New Shepard mission on October 13, 2020. New Shepard flew 12 commercial payloads to space on this mission, including the Deorbit, Descent, and Landing Sensor Demonstration with NASA’s Space Technology Mission Directorate under a Tipping Point partnership. This was the first payload to fly mounted on the exterior of a New Shepard booster rather than inside the capsule, opening the door to a wide range of future high-altitude sensing, sampling, and exposure payloads.

Also on board were tens of thousands of postcards from students around the world from Blue Origin’s nonprofit, Club for the Future, some of which will include a special NASA Artemis stamp.

NS-13 was a total success. 7th consecutive successful trip to space and back for this particular vehicle, 12 customer payloads including @NASA's lunar landing demo, and tens of thousands postcards from @ClubforFuture. Replay the #NewShepard mission: https://t.co/NP7XDzxJXi

Teslarati points out the while the New Shepard is essentially the same diameter as the Falcon 9, it is about half the height.  It carries one engine, a  liquid hydrogen and oxygen (hydrolox) BE-3 engine capable of producing 110,000 lbs. of thrust.  (For comparison, each of the nine Merlin-1D engines on a Falcon 9 has 190,000 lbs. of thrust.)  In practice, Blue Origin has only built four New Shepards in about 6 years and has never flown the same booster twice in less than 60 days.
Blue Origin is working on a massive orbital class vehicle, larger than the Falcon Heavy, as seen here: 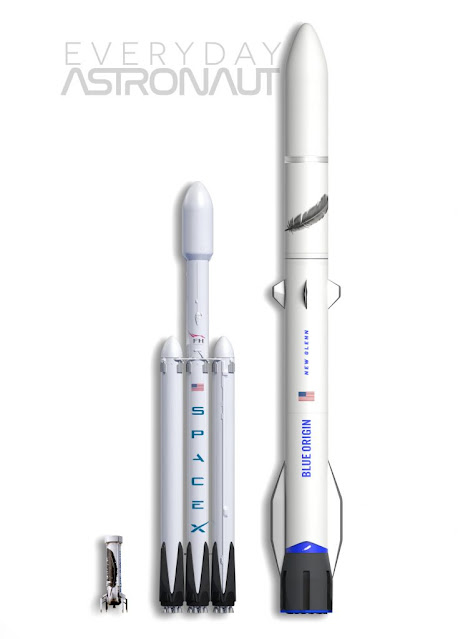 Picture by Everyday Astronaut.  Each of the side boosters on the Falcon Heavy in the middle is a slightly modified Falcon 9.  The little stub on the left is the New Shepard.  There will be a three stage version of the New Glenn, and while larger than the two stage version shown, it's still smaller than a Saturn V at 365' tall.  The Starship on its Super Heavy booster will be bigger than a Saturn V.
The New Glenn is meant to be reusable (they claim 100 times) and it will feature the methane-oxygen version of the BE-4 engine, which will also power ULA’s new Vulcan rocket.  The two stage version is a large-diameter, 82-meter (270 feet) tall rocket with the capacity to lift 45 metric tons (100,000 lbs) to low Earth orbit and an impressive 13 metric tons to geostationary transfer orbit.  Teslarati reports both the engine and the New Glenn appear to be in the throes of technical difficulties and delays.  During Blue Origin’s 52 minute New Shepard Flight 13 (NS-13) webcast, the company didn’t mention either New Glenn or the new BE-4 engine once.
Posted by SiGraybeard at 9:32 PM