This Has Been One Weird Hurricane Season

It's hard to avoid the talk about how active this hurricane season has been, and yet there's an undercurrent of weirdness I'm not picking up anywhere.  I'm approaching this from my viewpoint as an interested observer because we get storms here and I'm used to following them (I've called following the weather in the tropics my summertime hobby).  Let me start with a couple of obvious oddities.  If you watch much TV, like the Weather Channel, you'll see something like this graphic (dated yesterday, which means you may have seen something slightly different): 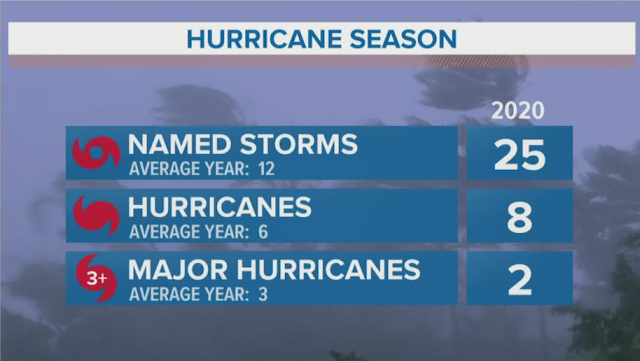 Yes, we've had a lot of storms: over twice normal.  But the majority of those have been weaker, milder storms.  While we have over twice a normal season's number of named storms, we've only had 33% more hurricanes than normal.  That, in turns, means the others have all been tropical or subtropical storms.  Subtropical storms never used to get named.  To finish the chart, we've had 1/3 fewer Major hurricanes (Category III or higher) than normal, too.
Perhaps you're familiar with the metric used for evaluating storm seasons called Accumulated Cyclone Energy or ACE.  The ACE agrees with the statement that it's an above average season, but not extreme.

You can see that the North Atlantic season is running 143% of average but nowhere near where the 200% number of named storms implies, so the ACE also says most of the storms haven't been hurricanes.  There was one landfalling, category IV storm, Laura, which struck in almost exactly the same place as the Category II storm Delta hit last week.   Delta briefly attained Category IV, for a few hours between crossing the Yucatan, and hitting Louisiana as a Cat II.  Worldwide, the ACE level is at 2/3 of normal Year To Date, with the lowest ACE in the Western North Pacific at 39% of normal.
The area referred to as Hurricane Alley has been the weirdest this year.  This is where low pressure systems come off the coast of Africa, then move west across the Atlantic toward the Caribbean, Central America, or the CONUS.  There have been several that resembled a Hurricane Alley storm that just never developed; others developed and went northwest far earlier than typical.  There hasn't been one storm that fit the pattern.  If you look at the NHC five day forecast right now, there's an area currently rated at a 30% chance of developing.  It's currently west of the Windward Islands and has crossed most of the Atlantic with a 10 to 30% chance of developing.
If you follow these forecasts, areas the forecasters are concerned about are first called an invest (area of investigation), then go through the sequence of being a depression, a tropical storm (which gets named), then a hurricane.  One of things that may be adding to our number of named storms is that the standards for naming storms have changed.  According to one source,

A vivid example of the impact of naming is this year's Subtropical Storm Alpha.  Thanks to the satellites watching 24/7, an area of low pressure and storms was noted well north of the Azores - which are well off the coast of Portugal.  They kept an eye on the system for a couple of days, and finally gave it the name Alpha at 1630 UTC on September 18th.  Within two hours Alpha went onshore onto Portugal crossed over the Iberian peninsula and dissipated by the 20th.  Since it never was a tropical storm, it wouldn't have been named under the old system.  Neither naming convention tells me why the US National Hurricane Center should have anything to do with naming a subtropical storm that develops offshore Europe and only affects Europe.  I think they have their own weather service.
All in all, it has been an active season, but not extremely so.  Dr. Maue has a graphic of his ACE chart that marks off prior years that were more active than this record year. 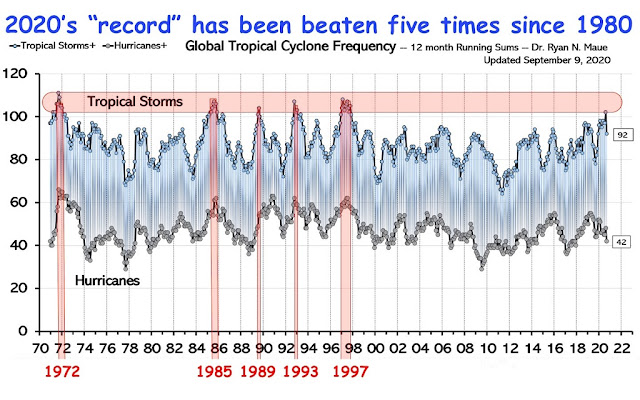 Do I need to put in a disclaimer that I don't mean to disparage people who went through Laura, or Delta or any other system?  I feel their pain because I've been through more tropical storms than I can recall and about a dozen hurricanes up through Category III.  I'm just always inclined to look farther when I find things that make me say, “that's funny.”  Of course, you've noticed the climate alarmists are blaming all of this on global warmening (or whatever they're calling it these days).  The overall downward trend of the ACE doesn't support that at all.
Posted by SiGraybeard at 9:55 PM