After Some Delays, It Looks to be Getting Active for SpaceX Texas

Just over a week ago, I relayed that Starship Prototype Serial Number 8 was set to be rolled to the test area and prepared for static testing.  There was an unusual, weather-induced delay in lifting SN8 from the mobile roller that took it from the assembly area to the test area and placing it on the test stand.  That delay was caused by winds that were steady over 20mph and gusting into the mid-30mph range.
The wind returned to normal levels for the area and SN8 was lifted onto the test stand yesterday.

Starship SN8’s first steps toward testing began on September 26th when SpaceX loaded the rocket onto a self-propelled mobile transporter (SPMT) and rolled it to the company’s dedicated Boca Chica launch and test facilities. Shortly after arrival, a crane and load spreader was attached to the rocket to lift it onto one of the pad’s test stands (Stand A). That lift never came and the crane eventually detached and retracted, kicking off what would become an unusual four-day delay.

It’s believed that the relatively high winds on the Boca Chica coast were to blame, creating conditions that were too hazardous to risk the precise, hands-on work required to lift and manipulate a ~70 metric ton (~150,000 lb) rocket. While undeniably heavy, an empty Starship’s huge surface area effectively turns it into a giant sail, catching and amplifying wind gusts. Attaching a Starship to a launch mount’s hold-down clamps likely demands millimeter precision, making installation and high winds obviously incompatible (or at least inadvisable).

Finally, around midnight on September 30th, winds died down in Boca Chica and SpaceX fired up a waiting crane and lifted Starship SN8 onto the launch mount. Soon after, technicians began the process of installing the mount’s temporary hydraulic ram – used to mechanically simulate engine thrust – to the rocket’s ‘thrust puck’.

The road closures that are required before any testing can be done start on Sunday, the 4th with back up days through the 6th.  All will be from 9PM to 6AM, Central.  It's expected the first tests will be static loads, and cryogenic tests, to ensure the vehicle can proceed to static firing and beyond. 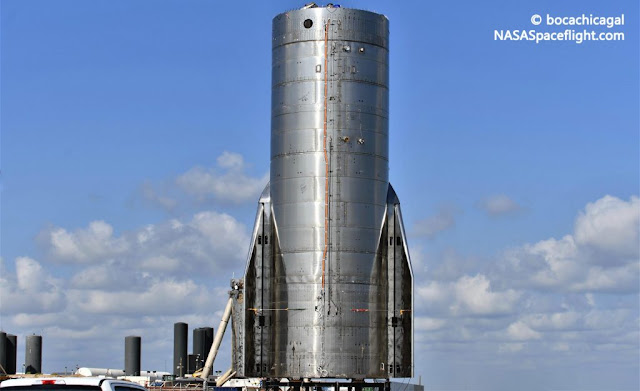 SN8 on the test stand, with its flaps in the folded up configuration.  One of the things that has been mentioned for testing is how well those flaps work when the section of tank they're attached to is at cryogenic temperatures.  Thermal expansion and contraction are well-known and well-understood things, but having hardware that's known to work beats working by simulations anyday.
Before SN8 can fly, the nose cone with its additional aerodynamic surfaces will be mounted to the top of this section.   Before that SN8 will have three raptor engines mounted.  Every prototype tested so far has had one engine.  The three engines will be static tested as the single engine prototypes have done.

According to Elon Musk, SpaceX will static fire SN8 twice before attempting its 15 km (~50,000 ft) launch debut. More likely than not, SpaceX will attempt a triple-engine static fire with the Starship as-is, install SN8’s nosecone and forward flaps, and attempt a second static fire while only drawing propellant from the rocket’s smaller header tanks (one of which is located in the tip of its nose).

Maybe I've heard too many stories in "Elon Standard Time," but I believe it's possible we'll see this fly before Halloween.  Which is a good date because the first operational flight carrying four astronauts to the ISS, Crew 1, is currently scheduled for the early morning hours on Halloween.
Posted by SiGraybeard at 9:19 PM