About the Remington Dissolution

I can't claim to be a Remington collector per se, but I have a couple of Remington rifles.  My Nylon 66, the “plastic fantastic” .22LR that was my family's gun when I was 14 and became mine a decade later.  And I have a Remington 700 in .30-06, that I bought during the life of this blog.  Remington bought DPMS after I bought my DPMS LR-308, and ended up buying Marlin after Mrs. Graybeard bought her Marlin 336.  I've written about all of these many times.
But that's not really why I'm here.
Because I have few Rugers around here, our "his and hers" 10/22s and my Ruger Precision Rifle, I'm on the Ruger mailing list.  I got the email in which they described their portion of the Remington sale, buying the Marlin brand, physical inventory and intellectual property.  DPMS has been sold to JJE Capital, reported to be the parent of Palmetto State Armory. 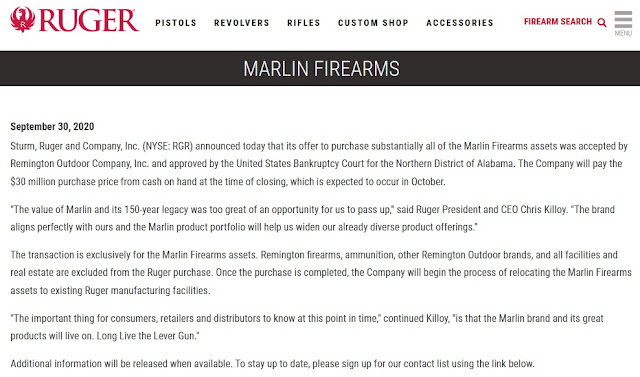 But that's not really why I'm here, either.
There has been a lot column space devoted to attacking Cerberus and that sort of private equity firm as well.  First I saw was J.Kb down at Gun Free Zone about the immorality and destructiveness of that sort of business.  Today, Peter Grant at Bayou Renaissance Man ran the same basic subject.
I'm not here to defend them, because I also think the private equity firms that do the things they do are scumbags.  More politely, they're sharks let loose in a pod of bait fish.  However (you knew that was coming!) I'm not here to say private equity firms need to be shut down and never allowed to operate.  Remington management themselves are not without blame.  Remington management, and I mean their management back before 2007 when they were attacked, chummed up the shark by bleeding money in the water.
I don't know the complete history that led to Cerberus buying Remington, but like sharks and most predators, private equity companies don't chase down the healthiest and most nimble prey.  They prey on the weak.  It's the first duty of a CEO to protect the company.  The balance is that the healthy and excellent companies will get merger and acquisition offers all the time.  It's up to the board of directors and the stockholders (if any) to accept or decline those offers.  Predators like Cerberus prey on companies that need money and don't have anywhere else to get it.  Companies need money urgently, like most of us, when something completely unexpected happens or when a bunch of things we thought we could get by with don't get by.
If the alternative is to have big government decide which companies can merge, and thereby which companies can exist, that's a much worse scenario than private equity companies taking down the weak.  Managers should know the private equity companies are a threat to their existence and manage their companies to not be targets for them.
But, hey, what do I know?  I'm just some dood with a blog.  And I observe the world around me.  I've seen companies start, companies fail, and companies last long times.  Just as not everyone can graduate on top of their class, not every manager is above average.  Companies run by better managers do better.
Posted by SiGraybeard at 9:39 PM