According to Ars Technica, the Russian state space corporation, Roscosmos, unveiled plans (link is in Russian) to develop a new rocket, called "Amur."  Readers may notice a certain resemblance to another well known rocket. 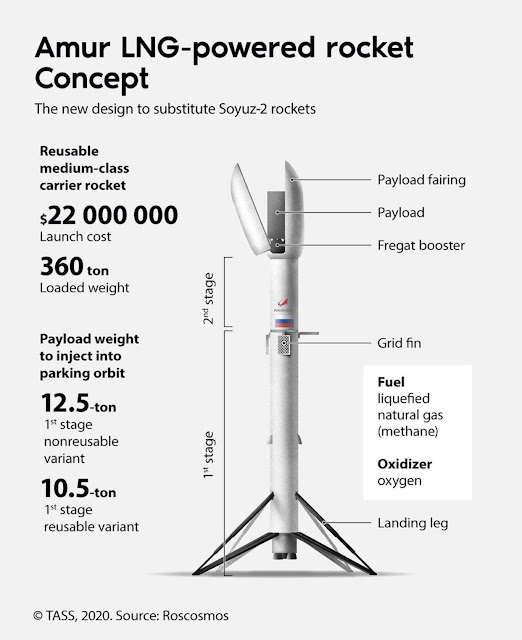 It looks like a smaller version of the Falcon 9, capable of lifting about half the payload of the established booster.  Those of you reading for a couple of years might possibly remember that I posted a story about how the rest of the world is unable to keep up with the US Space Companies, but the American company that was getting all the traffic in that article was SpaceX, and still is.  Simply they were eating the competition's lunches.  Within a year of that piece, Ariane had changed from saying "why make a rocket reusable and cut down on jobs?" to announcing development of something based on the F9, and China started to follow.

This might be an apropos time to mention that "Scrubtober" ended this morning with an on time launch of the Starlink 12 mission, and a perfectly nominal mission. That includes sticking the booster landing in the center of the 10-ring on the drone, and recovering both halves of the fairings; catching one and fishing the other half out of the Atlantic.  Most importantly, the mission successfully deployed their 60 satellites.

Getting back to the Amur, you'll note the grid fins at the top of the booster stage and the deployable landing legs that both resemble SpaceX's working solutions.

Whereas the Falcon 9 rocket's first stage is designed to either return to its launch site or land downrange on a drone ship, the Amur booster will launch from the Vostochny Cosmodrome in eastern Russia and land downrange, possibly at a site to be constructed along the Sea of Okhotsk. For now, Russia is not planning to land the booster at sea, due to often rough conditions in the Sea of Okhotsk. 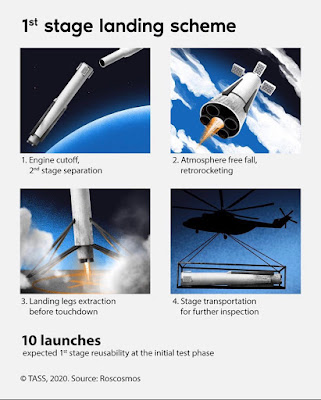 I see two warning flags in the Ars article.  First, the booster will use an engine that has not begun development yet.  I assume they know how to develop engines, but I don't think that's trivial art, especially if they have a target of 10 booster reuses without a major rebuild, something no one has successfully done yet.  We can be sure they don't have any particular advantage there.  (SpaceX will probably reach the 10th flight of one of their more experienced boosters in early '21).
The second hangup is as Ars notes:

It is important to note that Russia's space leader, Dmitry Rogozin, has announced a number of ambitious space projects in recent years and then taken no actions to see that they're carried through.

Roscosmos says the rocket will be developed by 2026 and development costs will not exceed $900 million.

Since they released this information publicly, it was ripe for comment by SpaceX founder Elon Musk.

Commenting on the Amur rocket on Twitter, SpaceX founder Elon Musk said, "It’s a step in the right direction, but they should really aim for full reusability by 2026. Larger rocket would also make sense for literal economies of scale. Goal should be to minimize cost per useful ton to orbit or it will at best serve a niche market."