SpaceX Has Been Preparing for Mars

It turns out that SpaceX's recent success in sticking the landing of a Falcon 9 on a floating barge is far from the most important R&D they've been doing.  ARS Technica brings an interesting story about how SpaceX has been experimenting with technologies needed for a Mars landing, and been doing it for years.


In September, 2014, a Falcon 9 rocket blasted off from Florida carrying a Dragon spacecraft bound for the International Space Station. The capsule carried some notable cargo, including the first 3D printer to be tested in space as well as 20 mousetronauts to study muscle loss. Yet the most far-reaching part of that mission came after the Falcon 9 deployed its upper stage and began falling back to Earth.
...
That's because during that launch—and about 10 others since late 2013—SpaceX has quietly been conducting the first flight tests of a technology known as supersonic retro-propulsion—in Mars-like conditions. It did so by firing the Falcon 9's engines at an altitude of 70km down through 40km, which just happens to be where the Earth's thin upper atmosphere can act as a stand-in for the tenuous Martian atmosphere. Therefore, as the Falcon thundered toward Earth through the atmosphere at supersonic speeds and its engines fired in the opposite direction, the company might as well have been trying to land on Mars.

These test flights were classic SpaceX—flying a primary mission, such as delivering cargo to the International Space Station, but also piggybacking other technology demonstration missions on top of it.

SpaceX was operating in a regime that NASA has virtually no experience in: firing retro rockets to slow a vehicle while it's traveling at supersonic speeds in an atmosphere, thin as that atmosphere may be.  While lots of people have modeled this in CFD (Computational Fluid Dynamics) and run models in wind tunnel simulators, actual experience has been virtually nonexistent.  SpaceX actually started testing this on an early Falcon 9 rocket in 2013.  A year later, they had attracted attention from NASA, who sent a space agency WB-57 airplane and a Navy NP-3D Orion to trail the spacecraft and capture images and thermal data.


Among those eagerly watching the flight tests was Bobby Braun, an aerospace engineer at Georgia Institute of Technology, who has led a joint research effort with SpaceX and NASA to study supersonic retro-propulsion. "I have access to all of that data, and I’ll tell you that it's worked like a charm every time," he told Ars. "The stability was manageable, and while there are still some issues, there are no showstoppers." 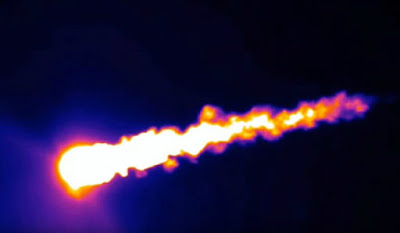 Falcon 9 during a supersonic retro-propulsion burn.  From ARS Technica.


Just three months after that September 2014 test flight with government planes collecting data, NASA had seen enough, too. It signed a Space Act Agreement with SpaceX, saying it would provide assistance with deep-space navigation and communications if the company would share its flight data. If NASA were to try to conduct that kind of test on its own, the cost would probably exceed $2.5 billion or $3 billion, Braun said. "It’s a great deal for NASA, in my opinion, and it’s a great deal for SpaceX."

This week SpaceX announced plans to land a Dragon spacecraft on Mars by 2018.  Even if they don't make their two year goal, this would be a monumental achievement for NASA or any other national space agency, let alone a single company, considering the 6,000kg Dragon is nearly an order of magnitude (10x) more massive than anything previously landed on the red planet.  The Dragon capsule's SuperDraco thrusters, part of the launch abort system, are the key to this approach and show another difference between SpaceX and NASA.  Abort systems are something that NASA has ordinarily put on a vehicle and thrown away after a couple of minutes; using it for arguably the most critical part of the mission is another sign of classic SpaceX.