From the inimitable Tamara, who needs a link from me about as much as West Texas needs another grain of sand (but it's the polite thing to do).


Salmon Caught Near Seattle Are Full Of Cocaine And Antidepressants

which, I've gotta tell you, is just the thing to read about a 15 minutes after having a baked salmon dinner.  No, I don't think it was from Washington.  It was supposed to be from Alaska.  Small comfort when talking about species that swim thousands of miles.


Apparently, samples taken from the [Puget Sound] water showed high levels of Prozac, bug spray, cocaine, Zantac, ibuprofen and 77 other drugs. These drugs littered not only the water but also the tissue of juvenile chinook salmon.

The samples, taken from the water near sewage treatment plants in the estuaries of the Seattle area, were collected over two days in September 2014.[Note added: SiG]

It's primarily the job of the municipal sewer treatment plants to remove things like that.  I'm sure some amount of drugs could be present in water runoff from spills on the land.  I'm equally sure that bug spray would be more common than drugs like ibuprofen or cocaine in stormwater runoff.  The vast majority is probably coming from human waste.  That has to either be removed by the action of the bacteria at the heart of a sewage treatment facility, or it would have to be removed by some sort of chemicals added to the water during treatment (which, in turn, have to be removed later during treatment).  As Betsey Cooper, administrator from the Wastewater Treatment Division in Washington's King County, told the Seattle Times, "not everything goes away".

I did a quick lookup of the lifecycle of the Chinook salmon in order to make sure I'm not way off base here.  They're born in freshwater streams in the area and live in those streams for as much as 18 months before moving down into the Puget Sound, where they can spend another few months before moving out to sea.  If they're getting that drug cocktail while in the Puget Sound, they could be absorbing it for as much as six months.  An average of three to four years later, they return to the same streams to spawn passing through the Sound again.  An interesting question to me would be whether or not fish retain those chemicals in their body tissues when they're in the open ocean. 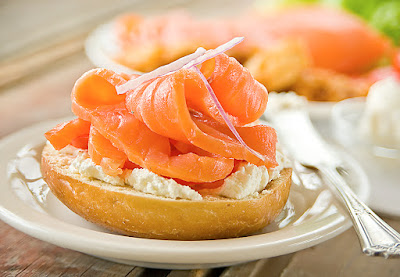 Maybe you can get your Prozac and Zantac at the same time you have your lox?