Rechargeable lithium batteries are close to the ideal battery for many applications.  They have excellent charge density in a lightweight battery.  They require more care in charging than the old lead acid batteries that are everywhere, or even nickle metal hydride batteries, but they pay you back with better capacity per unit weight compared to lead acid.

There are, of course, no ideal solutions, and the companies who make lithium batteries are always trying to improve them.  Monday, EE Times published an article about a discovery out of the University of California at Irvine that offers the possibility of a massive increases in the number of charge cycles you can get out of a battery.  There's even the potential for a rechargeable battery that never wears out - which has never been available.  As an aside, I just replaced the 2 1/2 year old lithium battery in my iPhone 5.  It had been discharge-charge cycled around 700 times and was showing signs of wearing out.  A battery that shows no changes in performance after many thousands of cycles sounds pretty darned cool to me!


[T]he 'wires' in question are deposited structures (wires only the sense they are long, thin conductors). In the work reported, the wires are gold, and they are coated or sheathed in manganese dioxide (MnO2). The device is essentially a capacitor, with the charge-storing capacitance being formed between interleaved arrays of the wires, all suspended in an electrolyte medium.

The use of nanowires is known to offer higher charge storage than films of identical materials. Thousands of times thinner than a human hair, they’re highly conductive and feature a large surface area for the storage and transfer of electrons. The gold wires (laid down on glass) are 240 nm across and 35 nm thick; various shell thicknesses between 143 and 300 nm were evaluated. Prior work has found that these filaments are extremely fragile and don’t hold up well to repeated discharging and recharging, or cycling. In a typical lithium-ion battery, they expand and grow brittle, which leads to cracking.

UCI researchers have solved this problem by coating a gold nanowire in a manganese dioxide shell and encasing the assembly in an electrolyte made of a Plexiglas-like gel: a gel of poly-methyl-methacrylate and LiClO4 (lithium perchlorate, source of the lithium ions to form a lithium ion battery). The combination is reliable and resistant to failure.

According to Dr. Penner, Ms. Le Thai was actually "playing" with various treatments when she tried the new method.  She cycled the test electrode 200,000 times over three months without detecting any loss of capacity or power and without fracturing any nanowires.


“Mya was playing around, and she coated this whole thing with a very thin gel layer and started to cycle it,” said Penner, chair of UCI’s chemistry department. “She discovered that just by using this gel, she could cycle it hundreds of thousands of times without losing any capacity.”

“That was crazy,” he added, “because these things typically die in dramatic fashion after 5,000 or 6,000 or 7,000 cycles at most.” The structure used by the UCI workers intentionally employed nanowires of high aspect ratio (very long relative to their width) in order to reveal or amplify the effects of any failures: none were seen.

You might say the new treatment extended the life of the wires by as much as 40 times.  It's actually quite a bit more, since she didn't find any failures in her 200,000 cycles, so they don't really know how long the batteries can last.  Since no failures were found, this raises the tantalizing prospect of a rechargeable battery that never wears out.  Let's not say "never"; because never is a long time.  The universe will apparently wear out at some point in the future, and any batteries around at that time will die with it, so let's just say they don't know how long these batteries may last, but it's far longer than any technology tried so far.

Spacecraft designers, undersea or underground systems designers; literally everyone who works on systems that are extremely difficult to work on are all quietly excited right now.  The batteries are not on the market, yet, but “This research proves that a nanowire-based battery electrode can have a long lifetime and that we can make these kinds of batteries a reality.” 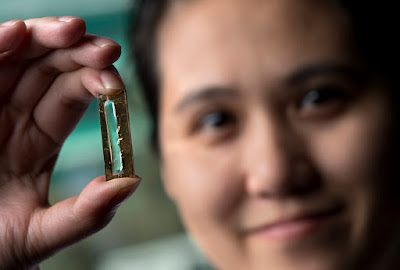