The Strange Story of Boaty McBoatface

Every so often you come across a story that just kinda tickles some neurons, or something.  I find it hard to forget.

So a few months ago, the UK Natural Environment Research Council opened a contest to name a new research vessel.  The rest, as they say, is history.  Weird history, yes, but history nevertheless.


Just a day after the NERC launched its poll to name the £200m vessel – which will first head to Antarctica in 2019 – the clear favourite was RRS Boaty McBoatface, with well over 18,000 votes. The RRS stands for royal research ship.

It was quite the competition until it closed on March 16,


Some undoubtedly were, with its website, which kept crashing on Sunday under the weight of traffic, showing dozens of serious suggestions connected to inspiring figures such as Sir David Attenborough, or names such as Polar Dream.

But the bulk of entries were distinctly less sober. Aside from the leading contender, ideas included Its Bloody Cold Here, What Iceberg, Captain Haddock, Big Shipinnit, Science!!! and Big Metal Floaty Thingy-thing.

Seriously, my UK friends: I love you.

Anyway, the NERC has always said that they were going to view the winning name as a suggestion rather than swearing they'd use it, lest they find themselves sailing, as the Guardian put it, "...in a vessel that sounds like it was christened by a five-year-old who has drunk three cartons of Capri-Sun." 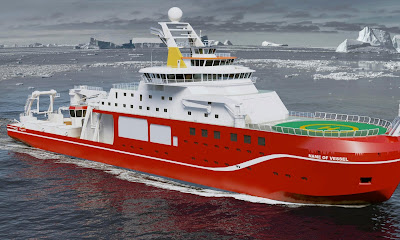 The RRS Insert Name Here.  Courtesy of the Guardian.

The Guardian waxes poetic over the name, reaching truly epic levels of tongue-in-cheekiness in anguish that the NERC will not use Boaty McBoatface as the vessel's name.  You should go RTWT.

Boaty McBoatface is dead. The government killed him.

Actually, that’s an exaggeration. The government has strongly hinted that it’s about to kill Boaty McBoatface, for it understands that vanquished hope is a more powerful tool than relentless despair. Present the people with an idol, then smash it before their eyes. Soon they will learn that resistance is futile, and the state’s power is absolute.

To be technical, the RRS Insert Name Here isn't a boat, she's a ship.  Ships are big enough to carry boats, which she will; boats don't carry ships.  We can't just change the name to Shippy McShipface, though, first because of the inevitable mispronunciations that will follow, but also because the people chose the name Boaty McBoatface.  She deserves to be Boaty McBoatface whether or not the other research ships laugh at her behind her back.