Negative Interest Rates and the Law of Unintended Consequences

The topic of negative interest rates has appeared many times in this column.  The theory the central banks use is that by charging savers to save, effectively putting a tax on savings, that the tax will discourage savings the way all taxes disincentivize whatever is being taxed.  So savers will start to spend, figuring it's better than watching their savings slowly evaporate.

What they didn't expect or intend was that it would cause a run on safes.  In a WSJ piece, excerpted here, we read:


Signs are emerging of higher demand for safes—a place where the interest rate on cash is always zero, no matter what the central bank does. Cash languishing in safes could thwart the Bank of Japan’s move to get money circulating more vigorously in the economy.

Shimachu Co., which operates a chain of stores selling hardware and home products, said Monday that sales of safes in the week that ended Sunday were 2½ times higher than in the same period a year earlier.

One safe that costs about $700 is now out of stock and won’t be available for a month, the chain said.

“I am a bit worried about what will happen next,” said Kazuo Matsumoto, a customer at one of the Shimachu stores in Tokyo. While he didn’t buy a safe, the 64-year-old said he might turn some of his cash into gold and keep it inside a safe-deposit box he rents.

The banks of Sealy or Liberty, may not pay any interest but once the cost of the safe is justified, the money doesn't evaporate.

As an aside, Japan is a genuine economic mess.  We learn that Japanese pensions are so low that retirees are turning to crime to stay alive.  If they steal a sandwich and get away, they get a sandwich; if they get caught, they get two years in prison, "three hots and a cot" (at a cost of Y8.4 Million to the state) - no mention if they get to save their pension while they're in jail.  As always, it's blamed on everyone and everything, but the fact is that despite efforts of the Bank of Japan for more than 25 years to stimulate the economy, it doesn't work.  Despite efforts to encourage spending, people are saving more.  This doesn't surprise me a bit, although I'm sure it's an unintended consequence to the Bank of Japan, because as I wrote here last June:


As Jim Rickards put it: "As a result, many citizens are saving even more from retirement checks and paychecks to make up for the lack of a market interest rate. So a Fed manipulation designed to discourage savings actually increases savings, on a precautionary basis, to make up for lost interest. This is a behavioral response not taught in textbooks or included in models used by the Fed."

I'm not saying that as a bunch of gun owners we probably already have a perfectly usable safe, and are therefore one step ahead of everyone else when interest rates here go negative, but I'm not NOT saying it either. 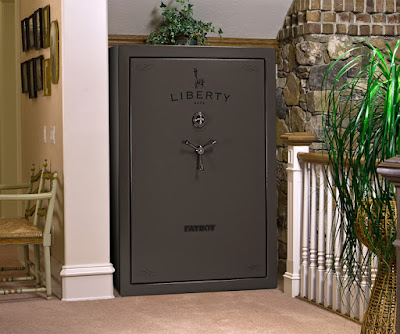