Try this simple thought experiment: current federal minimum wage (which was never intended to be a "living wage" or pay "to raise a family on") is $7.25/hr.  $15/hr is more than doubling that, and there is a wide spectrum of jobs that make between $7.25 and $15.  By law, everyone in that gap will be given a raise to $15, and everyone who worked hard, sweated hard, and got specialized training will suddenly have all of the effort negated (and, I believe, get demotivated). They will suddenly see that couple of dollars that distinguished them from the newbies/new hires vanish and they'll be lumped together.  But, at least, they'll get something for it!  Think of the people making $15.25 or $15.35.  They will suddenly be just on the verge of being minimum wage workers.  I'd say "again" but it's possible they never worked even close to minimum wage.

When you think about how obvious it is that doubling min.wage is such a bad idea, it's amazing that people argue for it.  In that August '15 piece, I talked about an online payments processor called Gravity Payments, and their CEO who decided that he would increase the minimum wage at his company to far beyond a mere $15/hour.


Back in April, CEO Dan Price announced a three year plan that would raise everyone's pay in the company to $70,000/year, even volunteering to cut his own pay to do so.  This made minimum wage in that company about $35.65 an hour.  Social Justice Warriors must have been beside themselves in orgasmic fits.  Today, just 3 months later:  not so much.  Now some of his best employees are leaving, the group isn't happy and the CEO has leased out his house, living in the garage to make ends meet.  Business Insider has the story:


“Everyone start[ed] screaming and cheering and just going crazy,” Price told Business Insider shortly after he broke the news in April.

But in the weeks since then, it’s become clear that not everyone is equally pleased. Among the critics? Some of Price’s own employees.

The New York Times reports that two of Gravity Payments' "most valued" members have left the company, "spurred in part by their view that it was unfair to double the pay of some new hires while the longest-serving staff members got small or no raises."

Hmm: I went by their website and the company is still in business, and they're still talking up this plan.  Since it's a private company trying to work out how to attract and keep the best talent, I'm all for it.  At least it's not like what they did in Seattle.  But read that again:  "it was unfair to double the pay of some new hires while the longest-serving staff got small or no raises"?   That sounds to me just like the problem of wage-compressing all of the people making between $7.25 and $15, or those folks making just over the $15 line now.   How do you explain what's going to happen to the kids who think "the companies have that money; they'll just pay us moar!"  As I said another time and place,


If I could talk with the protesters, really talk instead of just sitting while they shout slogans, I'd say let's play make believe for a minute.  Let's pretend it would be legal to do everything I'm about to propose.  We just have to follow the consequences to logical conclusions.  Since we're talking about more than doubling minimum wage, here's the experiment.  Take every bill out of your wallet, pocket or money clip and double the denomination.  I mean, if you have $1 bills, mark them $2.  Take $5 bills and mark them $10, $10 bills and mark them $20, $20 and mark them $40 (yeah, I know there's no such thing; work with me here).   I'm going to assume if you're worried about minimum wage, you don't have any $50 or $100 bills, but do the same with them if you have any.  Congratulations, you now have twice the money you had a few minutes ago.

The kicker is that everyone else in America gets to do the same thing.  Are you further ahead in life because we've doubled the numbers on the money you have?  Or is the guy that you worry about all the time, the guy who used to make twice what you make still making twice what you make?  What if the price of everything doubled, too?  Wouldn't you be exactly where you started from?

For a few weeks; even months, the allure of the bigger number of dollars will make everyone feel better.  The inevitable increases in the prices of everything will start to show up and the folks now making $15/hour will start to realize they're not really farther ahead.  They'll still have month left at the end of the money.  The thing is, it won't be completely obvious.  Everything will go up in cost, but proportional to the percentage of labor cost which we don't know.  Donald Sensing at Sense of Events has run a couple of pieces on this lately, and in one, he quotes a vice president at White Castle burgers.


“We’re disappointed. What this means for White Castle is we really have to evaluate how we manage our business,” [White Castle vice president Jamie] Richardson tells me. “About 30 percent of every sales dollar covers the pay of our hourly workers, and that doesn’t include management.”

“It’s our biggest investment, our biggest cost. And it’s one that if we see increase dramatically through fiat, and we don’t do anything — it’s unsustainable,” Richardson says. “We are in uncharted waters.”

Since I haven't been inside a White Castle since dinosaurs roamed the Earth (there are none in town), I went to their website and looked up the price on a combo meal.  It was $8.06.  If I extract the cost of labor in that meal and double it, the new version of that meal is $10.64, a 32% increase.  The results for an overall cost of living is going to depend on how much labor goes into the costs, but it's simply not possible that the cost of everything doesn't go up.   Unless the jobs get replaced by robotics, which is completely possible and even worse, because then the minimum wage becomes $0.00 and even though prices stay the same, the former workers have no income. 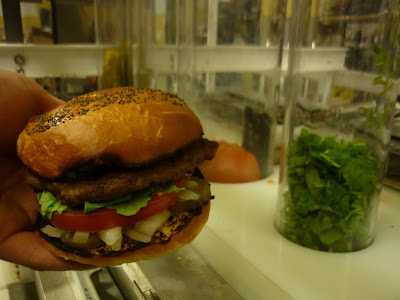