Another way of saying, "things I care about that you probably don't".

First, I have a list (in the lower right side bar) of the 10 most widely read posts ever on this blog.  For over a year now, an old post has crawled up, place by place, until it took the #1 place a couple of weeks ago.  The most popular post ever is now "A Little More About .308 vs. 7.62x51".  The previous #1 post, now #2, was a real oddity.  It never gathered many views or comments, and really wasn't much, but I found a funny picture of a skittles-pooping  unicorn to put in it, and one night somebody on Reddit found that picture.  (Don't you go looking at that!)  The thing is, I'd used that picture in other posts, so it's really odd that one post showed up and got flagged on Reddit.  Next thing I know, instead of the usual "few hundred" people who might read a post in a week or so, it suddenly banged up to over 7000 views.  I honestly have no idea if that post was ever looked at after that first few days of the spike, but right now #1 has exactly 400 views more than #2, and I looked at the stats page often enough to know that #2's number of views hasn't really gone up in the last month, while #1 has gone up over 600 views and continues to go up every day.  It looks like it will be #1 for a long time.

I don't know if you use my reciprocal blog list, but I use it all day every day.  Because of that, I will occasionally notice that the title post for a certain blog will stop changing.  I always thought I had no influence over that, but recently tried to clean up a few of them.  It has worked.  The ones I cleaned up were New Zeal Blog - when Trevor changed the name of the blog from that to "Trevor Loudon presents New Zeal", it stopped updating.  You could go to it, but the name of the latest post didn't change.  Likewise, Miguel's Gun Free Zone stopped updating a few weeks ago when he went through his loss of service at the hosting company.  Note again, all I did was remove these blogs from my list and then put them back.

And I stumbled across a new blog that I've added to my list, The Arts Mechanical, compiled by a mechanical engineer with multiple Master's degrees and lots of years in the industry.  You'll find a lot of cool tech stuff there, a lot on "how it's made" (for example), and some similar economics and "big picture" ideas that you'll find here.  Because he's actively in a job-search, you'll find lots on job hunting and the steaming pile of fail that modern Human Resources departments have become.  Lots of good stuff.  I've spent hours there already. 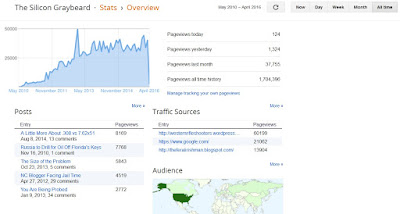 A screen cap of my stats page.  See that big spike, just left of center?  That's the Reddit spike.