No other public company approaches this degree of intimacy with government. According to an analysis of White House data, the Google lobbyist with the most White House visits, Johanna Shelton, visited 128 times, far more often than lead representatives of the other top-lobbying companies — and more than twice as often, for instance, as Microsoft’s Fred Humphries or Comcast’s David Cohen. (The accompanying chart reflects 94 Shelton visits; it excludes large gatherings such as state dinners and White House tours.)

Google, of course, claims innocence. In a company blog post, they attacked the WSJ for daring to question them. They were just there to help fix the steaming pile of fail called Healthcare.gov, and to talk about STEM education, internet censorship, cloud computing, trade and investment, and smart contact lenses. No, it had nothing to do with the several antitrust lawsuits against Google!  How dare you suggest such a thing!


Google’s dramatic rise as a lobbying force has not gone unnoticed. The company paid almost no attention to the Washington influence game prior to 2007, but ramped up steeply thereafter. It spent $16.7 million in lobbying in 2015, according to the Center for Responsive Politics, and has been at or near the top of public companies in lobbying expenses since 2012.

But direct expenditures on lobbying represent only one part of the larger influence-peddling game. Google’s lobbying strategy also includes throwing lavish D.C. parties; making grants to trade groups, advocacy organizations, and think tanks; offering free services and training to campaigns, congressional offices, and journalists; and using academics as validators for the company’s public policy positions. Eric Schmidt, executive chairman of Alphabet, Google’s parent company, was an enthusiastic supporter of both of Obama’s presidential campaigns and has been a major Democratic donor.
...
Google doesn't just lobby the White House for favors, but collaborates with officials, effectively serving as a sort of corporate extension of government operations in the digital era.

It can perhaps be argued that in an increasingly technical world, that the fed.gov should hire the best guns from the private sector to help them out.  The question becomes, can the feds be trusted to regulate Google (or Silicon Valley in the larger sense) when they've spent so much time in bed on the sofa together.  This is saying Google is the personal "IT help desk" to the White House staff.  Shouldn't that be up for public bidding, like any other government contract?  I can imagine several companies would like to have that position.  And there is no doubt that Google’s rise in Washington has coincided with public policy that is friendlier to the company.


In 2012, staff at the Federal Trade Commission recommended filing antitrust charges after determining that Google was engaging in anti-competitive tactics and abusing its monopoly. A staff report that was later leaked said Google’s conduct “has resulted — and will result — in real harm to consumers and to innovation in the online search and advertising markets.”

The Wall Street Journal noted that Google’s White House visits increased right around that time. And in 2013, the presidentially appointed commissioners of the FTC overrode their staff, voting unanimously not to file any charges.

I suppose there are probably naive folks who think search engines are impartial things, and return results based on some objective measures of popularity.  Sorry, but that just isn't the case.  Google (and their competitors) go through proprietary algorithms that change fairly quickly.  As a fellow gunnie, I'm sure you recall that they completely blocked out gun and ammo searches back in 2012, a practice that has shown up back as far as 2002.  It's not hard to imagine Google returning only unfavorable search results on White House political enemies, is it?  Can you see them influencing the election process, if only by restricting the information that can be found online?

The article contains a couple of very information-dense graphics that chart the 427 meetings between WH and Google representatives, and that chart the revolving door between the WH and Google.  The second chart reveals 55 cases of individuals moving from positions at Google into the federal government, and 197 individuals moving from positions inside the government to jobs at Google.  This isn't a new thing; the revolving door between the big banks and brokerages and their regulatory agencies is another example.  But wouldn't it be better all the way around for less corporate cronyism  to be the rule?  Unless you're one of the cronies, then it would suck. 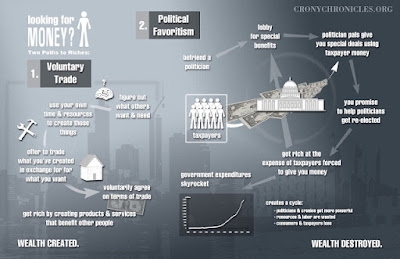