Not that way.  Get your mind out of the gutter.

Seriously, Reason magazine reports on a poll of millennial women, ages 18 to 36+.  The poll was taken in March by ABC (pdf warning).  While the top line results may look like it's a good group for the Evil Party, looking deeper than even a surface scratch speaks of a different picture.  To begin with, when they're at the young end of that age spectrum, they are fairly liberal, but the older they get the more conservative they get.  They completely flip percentages in 18 years. 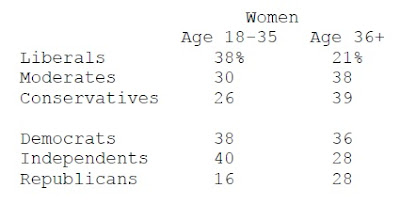 This is probably the most well-known demographic trend there is, so it's hard to be alarmed by this.  To just add a letter to the quote, "she who is 20 and not liberal has no heart; she who is 40 and not conservative has no brain".  (Attributed to various authors, notably Winston Churchill).


Asked to say which of seven issues they found most important, millennial women were most likely to be concerned about "economic inequality" and student loan debt. The next biggest issues, with 11 percent each, were "protecting gun rights," "equal pay for women," and "preserving access to abortion." Eight percent listed "lowering taxes" as their top concern and 4 percent chose "strengthening the military." [Note: Emphasis Added - SiG]

The myth of women earning about 25% less than men on the average sure is pernicious though.  No matter how many studies come out showing that it isn't true, or that the supporting studies don't compare the same jobs, or any of the other reasons, it just hangs on there.  Sure helps to have that 24/7 left wing media pushing those ideas for them, doesn't it?

The only thing that's remarkable in this study, to these old eyes, is that gun rights have come seemingly out of nowhere to be a strong concern.  The exact numbers they presented aren't terribly important, but they reported two issues that are solidly "most important" issues: student debt and income inequality.  There's your Bernie Sanders voters, right there, "gimme, gimme, gimme", or in this case, "pay off my student loans and make sure I make lots of money".  On the other hand, it sounds like the Evil Party is not appealing to these young women with their endless ranting on restricting gun rights.

As I've said many times, I hate day-to-day politics.  It's like cleaning out the cat box: a disgusting, nasty job that only gets more disgusting and nasty if you don't do it.  But I sure see ways to spread the liberty message to these ladies.  If they'd talk to an old dude who looks a bit more like Aqualung every day!