I started out my G0704 CNC project with the intent of using the lead screws already on the mill. As I said at that time, lead screws are serviceable, but aren't considered ideal in the CNC world.  The problem with lead screws while running CNC is backlash, that moment when you change directions and the wheel moves before the table does.  Backlash can be compensated for in CNC, and after my last post about the irregular circles I had cut, I adjusted my backlash compensation on the small (Sherline/A2ZCNC) machine.  Doing some more reading on the subject, one viewpoint I read said that backlash compensation was less effective for circles and arcs than when running the machines manually.

I also mentioned in the original post that the DVD of plans I bought had three approaches, two with different versions of ball screws, and I had chosen to go with the lead screws for two main reasons: first is the simplicity and speed with which I'd be up and running; second is that with lead screws, I could put cranks on the motors and run the mill manually, without using the CNC.  That might be convenient if the SHTF and power was extremely scarce.  The big advantage of ball screws is that they don't have backlash, but the disadvantage is that you can't operate the mill manually.  Ballscrews don't offer holding torque to keep things from moving when you don't want them to.

There's a tremendous amount of information on lead screws and ballscrews of all kinds at Lead-Screws.com on their "Application Engineering" page and at the tabs for each type in the left column.

So I've decided to switch my approach over to using ballscrews.  There's a community of folks that have done these conversions and most use ballscrews from either Roton (Lead-Screws.com) or from an eBay store, linearmotionbearings.  I ordered from linearmotionbearings because it looks like less work to use his products and the reports are his ballscrews that include two ballnuts provide better performance.  The Roton screws are built differently and one trick that's done is to remove all of the balls and replace them with slightly larger ones. 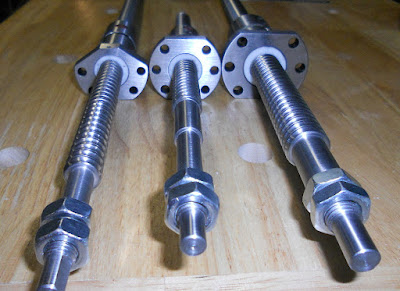 I know what you're thinking now: does this toss out everything I've made so far?  I'm almost 100% sure that I won't need to toss out everything.  While I'm not sure I don't toss anything, I might need to modify or toss something.  What I've built are motor mounts and standoffs, with one spacer for the Y axis.  The spacer is the same, the motors are the same, and these ballscrews are the same size at the point that the motors will mount.  I have the instructions, of course, but the folders on the DVD are full of options and it's not completely clear what parts I need.   What I'm sure I need to make are some mounts for the ballnuts in that picture, and I'm pretty clear on what they need to be.

There will be adventures ahead, but I think this has the potential to turn out really cool.