The velocity of money has crashed to the lowest level in 57 years. 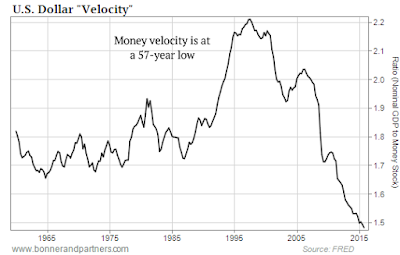 The velocity of money is the rate at which it changes hands.  You can see from the chart that through the tech bubble of the 90s, the velocity was the highest value on this chart (which goes back to 1960).  Around the 9/11 attacks it dropped back toward the previous levels, but the interest rate cuts and other activities of the Federal reserve helped it pick back up, until the real estate bubble they created blew creating the crash of '08.  After '08, despite all the money printing quantitative easing and ZIRP from the Fed, they never were able to get the number back into its historic range.

The velocity of money reduces to a simple algebraic equation.  Vt*M=nT
where


Vt   is the velocity of money for all transactions.
M   is the total amount of money in circulation on average in the economy (see “Money supply” for details).
nT  is the nominal value of aggregate transactions.

The idea here is that if the Fed printed a quadrillion dollars and put them in a safe, they wouldn't be inflationary because their velocity is zero. The problem is that this theoretical boundary case tells us nothing.  I mean, if a bank holding those imaginary dollars really needed them, like to stave off bankruptcy, do you doubt they'd use them?

So what does this collapse mean?  For one, there sure is no sign of an economic recovery going on, nor has there been one.  You've heard, I'm sure, the "great recession" ended in '09?  Not by this chart.  I figure the next "little while" (year? two? we're extrapolating off the end of that curve) is going to look more like the last eight years than a healthy economy.