A Good Day to Keep an Eye on SpaceX Boca Chica

Since I subscribed to the Lab Padre YouTube channel, I keep an eye on it.  Can't say I join the chat much or just sit watching for hours, but I check in and see what's going on.  If they're on the verge of doing something important, I'll watch more, but I mostly just check in to see if anything interesting is going on.
Today was interesting. Today the engines for SN8 started showing up.
Starship prototype SN8 has completed all its tests to date: static pressure, cryogenic loading, cryogenic pressure and everything that can be done without engines.  All tests were done on the overnight shift, with the roads closed from 9PM to 6AM (Central).  On one night's testing, a leak was detected and the test aborted.  The leak was fixed on the day shift the next day and the test completed that following night.  I'm not sure it was within 24 hours, but it was close.
Elon Musk has always said that once the vehicle is fully tested, it will have three raptor engines installed, and testing will resume until they complete two static firings of the three engines.  After the engines have been static fired, the nose cone and forward control surfaces will be added.

According to Elon Musk, SpaceX will static fire SN8 twice before attempting its 15 km (~50,000 ft) launch debut. More likely than not, SpaceX will attempt a triple-engine static fire with the Starship as-is, install SN8’s nosecone and forward flaps, and attempt a second static fire while only drawing propellant from the rocket’s smaller header tanks (one of which is located in the tip of its nose). Only time (or Elon tweets) will tell.” 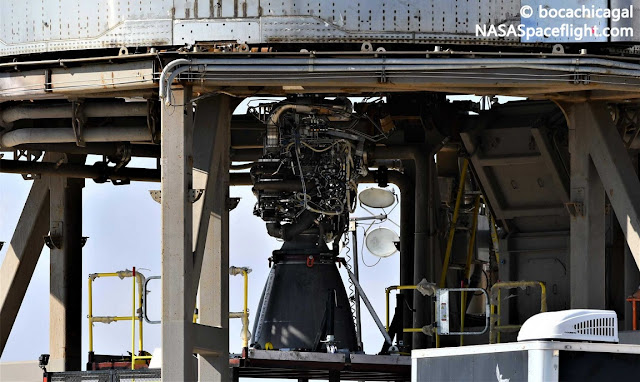 Photo credits in the picture, of course.
This might be an appropriate time to mention that three raptors have never been fired together at the same time.  The raptors can be fully throttle controlled, but have been measured at half a million pounds of thrust on the test stand.  While modelling software to make sure nothing bad happens is continually improving, there is nothing like testing to help convince you that your design works.
Teslarati reports that two of the three raptors were installed today.  By blind luck, I loaded the Lab Padre Nerdle cam and saw a platform like the one pictured above lifting an engine into place.  Later, I saw the second engine off to the right of the test stand, before it was lifted into place.  It's expected that the third raptor is in one of the buildings in the area they call the shipyard and it will be installed tomorrow.
I believe it's possible that testing could resume quickly and a static firing could be as soon as next weekend.  I still remain optimistic we could see the hop to ~50,000 feet by the end of the month.
Posted by SiGraybeard at 9:07 PM