Well, some of the nerds on the Lab Padre Nerdle Cam are using that word.  Because there has not been a successful launch from Cape Canaveral so far in October.  Not that we're a long way into the month, but the string goes back into September.
This morning, SpaceX was scheduled to make the fourth attempt to launch the mission called Starlink 12, the next batch of 60 satellites.  Liftoff was scheduled for 0751 EST or 1151 UTC.  About 20 minutes before that, launch directors gave up waiting for signs of good weather and scrubbed.  Launch is set for 0729 tomorrow and weather has a 70% chance of being acceptable.  This is the mission that was originally set for September 17th and was aborted because the recovery ships could not stay stationary in the currents off South Carolina.
The range has given priority to the United Launch Alliance NROL mission on their Delta IV Heavy because of its national security implications and bumped SpaceX later whenever resource requirements conflicted.  After the ULA mission was scrubbed for the seventh time, 1154 PM EST on Wednesday, September 30th, they gave SpaceX a go to retry this mission on Thursday morning, October 1st.  That mission was aborted by the Falcon 9's software which detected an "out of family" sensor error in the ground support equipment 7 seconds before liftoff (you can sing the "one of these things is not like the others" ditty now).  This F9 was on Pad 39A and is the mission that was scrubbed due to weather this morning.
While analyzing the sensors, there was a second Falcon 9 over on Pad 40 with a GPS III satellite for the Space Force on top.  This one was scheduled for October 2nd, and was aborted with 2 seconds left in the count.  I was out on the side yard hoping to see this one, but the weather was pretty bad here that day.
The GPS III launch has not been rescheduled, and I find no word on the ULA launch.  Spaceflight Now says there is no set time for the Delta IV launch and adds:

I don't mean to pick on ULA for the Delta IV; I'm guessing that except for the one weather issue, they were all ground support equipment (GSE) and that just might be because with their low launch cadence, the GSE gets affected by the environment.  "Rust never sleeps" isn't just a catchy name for an album.
Nevertheless, the Falcon 9 launches with their higher cadence had gotten to be very smooth and the few aborts with seconds left in the count have caught the CEO's attention, meaning Elon Musk is coming to the Cape this week.

Musk also says that SpaceX is “doing a broad review of launch site, propulsion, structures, avionics, range, & regulatory constraints” to determine if an apparent goal of “48 launches” in 2021 is feasible.

“We will need to make a lot of improvements to have a chance of completing 48 launches next year!”  Elon Musk, October 3.

48 launches a year is obviously four short of one per week, and I don't know of any company, any government, or any entity launching orbital class vehicles that can do that.  It's ambitious, but the company is nothing if not ambitious, as seen both here and over in Texas, where Starship SN8 has completed it's first pressurization test and is scheduled for its first cryogenic tests tonight.  Still moving toward its static firings and its 50,000 foot test hop.  Behind it are more Starships built to the same level. 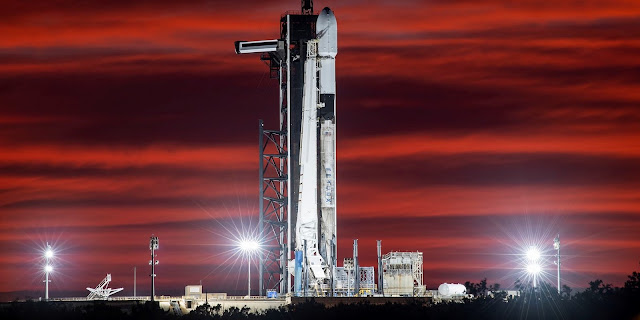 The Starlink 12 Falcon 9 on pad 39A as sunrise paints the sky in vivid reds.  SpaceX photo.
Posted by SiGraybeard at 9:17 PM