I've been a bit scarce around here since Friday; yesterday, we attended a going away party for some dear friends who moved over to the far side or Orlando from here, so about 90 miles away.  In the big picture sense, not that far, but still far enough so that we won't see them every couple of weeks like we're used to.  The party took some prep time yesterday, and lasted longer/later than expected.  Today has been catching up.  So a couple of smaller post topics that are interesting but don't need a longer post.

It's not really news, but just to confirm it, the end of solar cycle 24 was marked last December, and we're now firmly in cycle 25.  NASA and NOAA made the announcement on the 15th.  The number of cycle 24 spots has been in decline, and while the first cycle 25 spot was seen over a year ago, the cycle 24 spots seem to have stopped.

“How quickly solar activity rises is an indicator on how strong the next solar cycle will be,” says Doug Biesecker of NOAA’s Space Weather Prediction Center, co-chair of the Solar Cycle 25 Prediction Panel. “Although we’ve seen a steady increase in sunspot activity this year, it is slow.”

Last Thursday, the 17th, SpaceX had scheduled the launch of their next bunch of Starlink Internet satellites.  The launch was scrubbed with something like 10 minutes left in the countdown.  It was quickly rescheduled for the following day, and almost as quickly scrubbed again.  It took at least another day for us to find the reason: the booster recovery drone ship was unable to remain stationary in the ocean currents off the southeast coast.

The major reason for the strong currents going out of range that the ship's thrusters can handle is the effects of Hurricane Teddy in the Atlantic basin, southeast of Bermuda.  A second consideration is that being close to the fall equinox, tides and tidal currents are higher than normal - even more so with the moon close to being a New Moon on the equinox as it is.  Last Thursday, the day of the mission scrub, the hurricane was quite far from Bermuda: 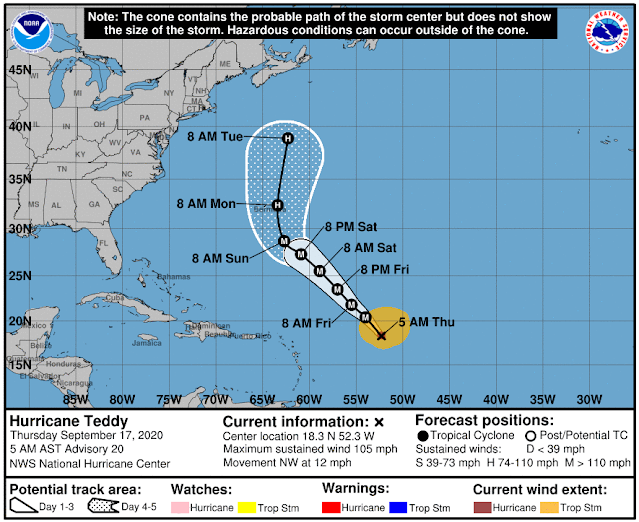 For reference the drone ship (in this case, Just Read The Instructions, JRTI) is deployed northeast of Cape Canaveral, about 350 to 400 miles out.  That puts it around the latitude of the Georgia/South Carolina border.  The storm is still south of that latitude; it's due east of Cape Canaveral as of the 2PM update.

[in a tweet...] Musk revealed that SpaceX means for its drone ship “thrusters to be upgraded for future missions,” an obviously intuitive response to drone ships being overpowered by ocean currents. There’s one simple problem, though: drone ship Just Read The Instructions, the same ship currently unable to hold its position in (admittedly strong) ocean currents, completed extensive upgrades just a handful of months ago.

JRTI now has thrusters bigger than those on her sister ship, Of Course I Still Love You, so I'm assuming JRTI was sent on this flight because it can withstand higher currents than OCISLY.  Both will need to be upgraded.

My guess is that JRTI will be able to handle the currents later in the week.  By Wednesday, Teddy will be in the Canadian Maritime Provinces headed for Greenland and the Atlantic basin will be calming back down.  We'll also be on the other side of the equinox, with the moon approaching first quarter next weekend.  All of those seem to line up for lower currents.

Finally, over in Boca Chica, Starship prototype serial number 7.1 is still intact. They have yet to actually test the prototype to bursting, but have gone through several other tests with cryogenic loads.   The next tests are scheduled for Monday night through Tuesday morning.  Tropical storm Beta is currently making news in the Gulf, but the southernmost portion of the Texas coast, where SpaceX is located, is not under tropical storm watches or warnings and it should be possible to do the tests. 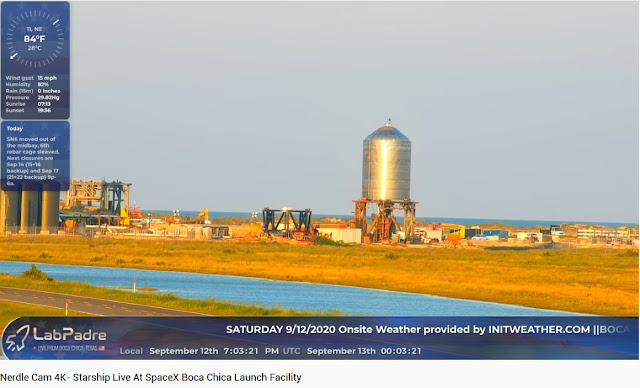 This is SN7.1 last Saturday.  At the moment, the camera framing is different, but 7.1 looks the same.

Posted by SiGraybeard at 5:25 PM