After my last post on radio, an anonymous comment complained that something they’d like to see available in the ham universe isn’t there, and thought it was because hams are eager to report anyone who uses illegal technology so that the offenders can be loaded onto the trains to some metaphorical Auschwitz-style camp.

The communication security situation doesn't appear to have changed since the seven year old post. Nobody will openly build a crypto add-on gadget, because too many hams will spend too much effort snitching on them. Hams won't quite push you into the ovens with their very own hands, but they will alert the enforcers if you try to get out of the line to the ovens.

I think this is missing the point entirely, but that's easy for an outsider to do.  Could it be they don't want to send you off to the ovens, they’re just trying to protect the ham bands?  Or someone might not talk about what they’re experimenting with because they don't want to get fined or their license revoked?  Remember, we're not talking BLM or antifa here, normal hams can get fines.  Better to not talk about the crypto system than draw attention to themselves.  The ham bands aren’t full of whacked-out haters looking to get rid of everybody else, but hams are very accustomed to people using the bands without a license or not following the band plans, causing interference problems.

For as long as I can remember, hams have been trying to keep other users out of the ham bands.   Go listen to the bottom 100 kHz of 10 meters; if propagation is open you'll hear fishing boats chatting, mostly in Spanish.  Before the fishermen, it was “sliders” that would come into the 10m band - sliders were CBers whose radios had VFOs and weren't just channelized only for the Citizen's Band.  If you hear anyone talking between 28.000 and 28.100 they’re not supposed to be there – it’s allocated for CW and narrowband data pretty much worldwide.  Having all communications unencrypted makes the jobs of both the FCC and the ARRL Volunteer Monitors (formerly the Official Observers, OO) easier, among other things.  Prohibiting encryption makes it practical to understand everyone on the bands so both the FCC and the other hams know the stations they’re monitoring aren’t using the frequencies without a license.

If you create a voice scrambler, it’s going to sound noise-like, but in a narrowband signal (so the radio can handle it).  That will stand out like a sore thumb.  Hams will start looking for it expecting it to be some sort of Cable TV (data) leakage or some piece of equipment that’s broken.  They’ll especially go looking for the signal with direction finding equipment if it’s tying up a repeater or popular frequency.  Interference from other services or broken equipment happens all the time.

Hams are self-policing because the spectrum auctions the FCC has held prove that spectrum is worth real money to companies and there's a widespread feeling that if we become more of a pain than we're worth, the FCC will sell the spectrum to some other entity.  Or the cities/counties/states who rely on ham radio for disaster communications will do their best to direct the FCC enforcement group to the person violating rules.

It’s a self-consistent system that makes sense.  The FCC allocates portions of spectrum to different services, and virtually all services pay fees for that access.  If nothing else, they pay for their license.  The regulatory agency needs to know if everyone is playing nice.  More important than that, they need to know whom to contact to shut down a station when that station is is putting a transmitter spurious product on some important frequency like 121.500 MHz: the aviation emergency frequency.  By its nature, radio doesn’t respect borders, so interference between states (and across borders) is routine.

Now you can argue that the old way of allocating frequencies is outdated in the age of frequency-agile radios and should be scrapped.  Everyone with every type of license could use the entire 2 to 30 MHz HF band, for example.  I don’t see how that could work with many of the services they regulate, but let’s say the FCC does this.  The problem is the whole world uses frequency allocations by service like the US does and having services on known bands, similar all over the world, makes interoperation between countries more feasible.  Changing this worldwide would obsolete every radio on earth, from shortwave listeners, to marine radios, to aircraft to physical therapy machines.  If you want to change spectrum allocations for the entire world, remember big wheels turn slowly and there are no bigger wheels than all the governments of the world.

It may be that your desired invention is out there, but nobody talks about it because they don't want to be targeted by FCC enforcement.

If you want to do those experiments though, I'll tell you what to do.  Go up above 1 GHz where the bands are big and spread out, and do your experiments up there.  They’re lightly used in much of the nation, so you can experiment to your heart’s desire.  Thanks to a combination of technical reasons, your chances of being monitored are minuscule.  If you want an HT to play with, they exist for the 1.2 GHz band, the most heavily used of all the microwave bands, with the possible exception of 2.4 GHz where ham allocations overlap the WiFi band.  In current production I see the Alinco DJ-G7T. There are other, older models out there in the used market.

It goes without saying to avoid repeater channels, which make it easier to be heard over bigger areas.  You can look on one of the repeater directory websites (or buy a book) to see if there are any 1.2 GHz repeaters in your area and avoid those.

You might want to go higher than 1.2 GHz.  There are ham hacks to some WiFi routers.  While that's a crowded band, you might not attract as much attention if your spectrum and coding aren’t exactly the same as everyone else.  Up at 10 GHz there are no HTs but commercially made gear is available.

At 10 GHz, normal frequency uncertainties make finding anyone to talk with difficult.  A 1/2 part per million TCXO, those are good for ham gear but used to be rather expensive, puts two people as much as 5 kHz apart at 10 GHz.  If both are on SSB, they might never hear each other.  It's a good place to experiment because being randomly overheard isn't the issue most hams have on 10 GHz; they have a hard enough time hearing someone who they aren't working hard to set up a contact with.

Once you get the hardware and software working, you can move it to any band it fits in. 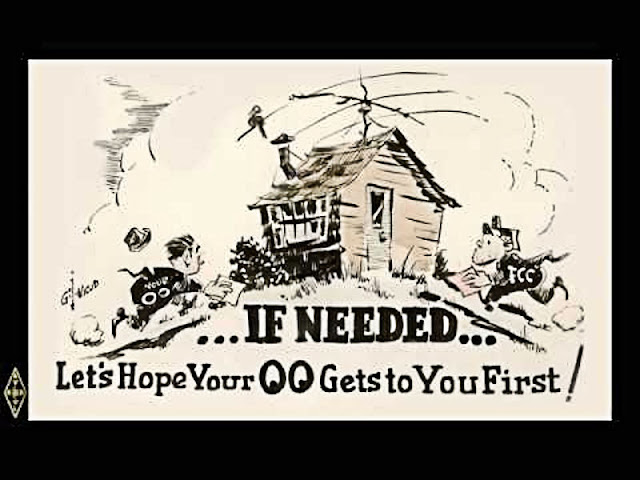 In the early days, the ARRL monitors - the Official Observers - were advertised as our friends.  They tune the band listening for signals with problems and let you know if your signal was one.  This cartoon emphasized that if you had something wrong with your station, it would be better to get a note from your OO instead of the pink slip from an FCC monitor.